“Higher, faster, further” is a motto that applies not just to sport but also to mobile telephony standards. At least as far as speed is concerned: Waiting in the wings is a new standard in the form of 5G that is predicted to be 20 times faster than the fastest mobile telephony network currently operating. As well as offering more efficient streaming for users, 5G is also poised to usher in the age of autonomous and networked driving. Not to mention its role in advancing the causes of the Smart City, Industry 4.0 and telemedicine.

Picture the scene: there’s been an accident with a resulting traffic jam, bad driving conditions and oil on the road. It’s precisely risks of this sort that the networking of cars is set to reduce in the future. Instead of relying on their own eyes and electronic assistance systems, drivers will be able to access the information provided by the cars in front and pass it on to the vehicles behind them. And yet, if cars are going to be able to communicate reliably and without time lags, they’re going to need more than the mobile telephony services currently available. And this is what 5G is intended to fix. Network operators, car makers and political decision-makers alike have very high expectations of the next generation of the mobile telephony standard. The idea is for 5G to be able to transmit data streams to a significantly greater number of mobile devices much more quickly and without lagging - in the process also creating the conditions for the age of autonomous driving. As long ago as 2016, the then German transport minister Alexander Dobrindt was lauding 5G as a “key technology for automated and networked driving”.

"5G is a key technology for automated and connected driving enabling direct data communication between vehicles and infrastructure."

Alexander Dobrindt, Federal Minister of Transport and Digital Infrastructure from 2013 to 2017

Automated or autonomous vehicles need incredibly accurate information concerning their position and movements on the road, road surface conditions, traffic and weather and the driving manoeuvres of other cars. It’s true that automated vehicles have their own sensors with which they can scan the traffic and their environment. However, if these electronic sense organs are impaired, for instance due to poor weather conditions, 5G mobile components can offer an additional level of protection by providing cars with information from other vehicles in the vicinity and the roadside infrastructure. This requires high and stable transmission rates with little lag.

A question of latency

The new standard promises speeds of ten gigabits per second. This would be twenty times faster than the fastest LTE network currently operating in Germany, making it possible to download an 800 megabyte movie in less than a second. What’s more, 5G is intended to make virtually lag-free transmission possible. With 3G, the latency period is about 100 milliseconds; with LTE, that is to say 4G, it’s still anything up to 50. For the first time, 5G promises a reaction time of only one millisecond. This would effectively mean the real-time movement of data from the sender to the recipient. For networked cars this would be a quantum leap, a fact emphasised by the mobile telephony sector. “If you’re travelling at 200 km/h on the motorway, it makes a huge difference whether you have a reaction time of 50 milliseconds or just one to apply the brakes,” Vodafone spokesman Dirk Ellenbeck told German broadcaster NDR. In specific terms, it’s all about the difference between several metres or just a few centimetres required by the car to slam on the brakes. 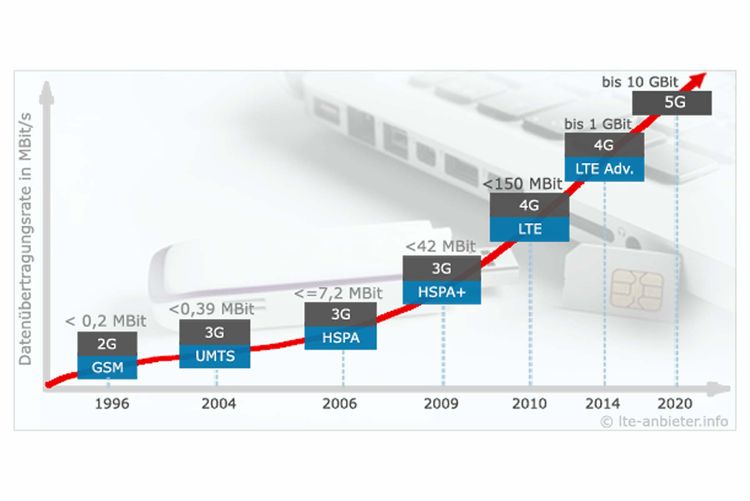 The networked machines in Factory 4.0 also require fast and reliable data connections, which could in turn be equally beneficial for the smart electricity grids needed for the Smart City or telemedicine. 5G is currently being trialled in Berlin and Hamburg. In Darmstadt, 18 5G antennae will be installed this spring for testing purposes, with the medium-term intention of providing data to a semi-autonomous tram. But it remains to be seen just how comprehensive the cover of the new standard will be in real operation: this is still a hotly disputed topic in the run-up to the auctioning of the 5G frequencies scheduled for this coming March.

Conflict between the Federal Network Agency and mobile telephony providers

The Federal Network Agency is calling for the network operators taking part in the auction to provide a mobile data speed of at least 100 megabits per second and a latency of no more than 10 milliseconds to at least 98 per cent of households in every German state, all railway routes used by more than 2000 passengers a day and all motorways and principal trunk roads by 2022. The aim is then for the remaining trunk roads to have the same data speed in place by the end of 2024. The intention is for all regional, state and central waterways and the remainder of the rail network to be equipped with a data speed of at least 50 megabits by the same date. Moreover, every network operator is called on construct 500 transmission stations of at least 100 megabits on those white spots which have thus far been without coverage. The network operators will not however have to rely exclusively on their own network expansion efforts to meet these requirements. When it comes to providing data to transport routes, they will be able to take into account the expansion work done by other mobile telephony providers.

And yet, the network operators have criticised these requirements as too stringent and fear the imposition of economically unviable costs for licences and the expansion of the network. Even though they offer a high data throughput, the shortwave frequencies provided for 5G would have a significantly shorter range: the digital association Bitkom talks in terms of one kilometre. For this reason, it is claimed that they would be unsuitable for comprehensive coverage. The network operators would thus have to build many more base stations than exist in the current 4G network. Moreover, a nationwide fibreoptic network would be a precondition for supplying the required bandwidth to the transmitting stations. The Federal Network Agency has for its part announced that it will over the coming years award additional frequencies that would be better suited to the provision of full nationwide coverage.

All the providers - Telekom, Vodafone and Telefónica (O2) - have filed legal objections to the auction conditions. Telefónica has gone a step further by filing an emergency petition with the administrative court of Cologne for the frequency auction to be delayed until such time as a decision has been reached on the rules of the tender. In the worst-case scenario, the beginning of the networked age, which was scheduled for 2020, will have to be delayed for a while. 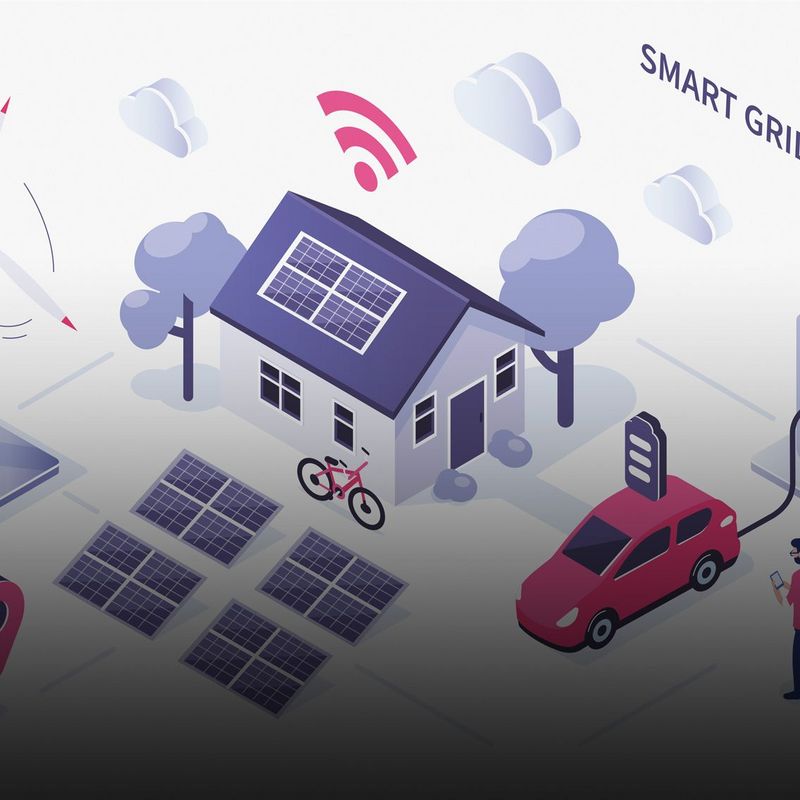 What is a smart meter gateway?

What is a smart meter gateway and why does its security matter so much? Markus Bartsch tells all in this short interview.

What is the digital twin?

What is the meaning of “digital twin” and how can it help to prolong the lifetime of plant and machinery n the real world?

From the A-network to 4G

1G
At the dawning of the mobile telephony age in Germany in 1958, the analogue A-network was given the designation 1G. Connections were still made manually. It was only with the introduction of the B-network in 1972 that mobile telephone users were first given the freedom to dial numbers themselves. But if you wanted to ring a mobile phone user, you needed to know where they were so that you could dial the right area code. And mobile telephony wasn’t in any case truly mobile: were you to leave the radio range of a transmitter, the call would be cut off. This changed in 1985 with the introduction of the C-network, which was still analogue.

2G
The second generation, in the form of the digital D-network, which was based on the GSM standard (G), was given the go-ahead in 1991. The GSM-based digital transmission method significantly improved speech quality. It also became possible for the first time to send data such as SMS. GSM achieved a bandwidth of 14.4 kilobits per second, a figure which was boosted to 55 Kbit/s in 2001 with the introduction of GPRS. The GSM extension known as Edge (E), first introduced in 2006, realised bandwidths of up to 150 Kbit/s and was used in the first iPhone. These days, the letter “E” on your mobile screen stands for glacially slow mobile Internet.

3G
As of 2004, UMTS paved the way to a bandwidth of 384 Kbit/s, making it possible for the first time to send and receive two different data streams simultaneously. In other words, you could receive an e-mail while talking on your phone - thus officially ushering in the age of the mobile Internet. Because the transmission rates soon reached their limits, the year 2006 saw the creation of the UMTS extension HSPA (H), which initially offered download speeds of 1.8 Mbit/s, culminating in the last development phase, HSPA + 2011, in download speeds of 28 Mbit/s and upload equivalents of 11 Mbit/s.

4G
The new 4G standard was launched in 2011. LTE (Long Term Evolution) built on the UMTS infrastructure but made much more efficient use of the frequency spectrum than its predecessor. In most cases, it offered a bandwidth of up to 50 Mbit/s for downloads. LTE Advanced now offers speeds of up to 500 Mbit/s.