Nowhere does the wind blow more fiercely or consistently than out at sea. And yet, offshore wind turbines  still have to be anchored in to the seabed – and this is time-consuming and costly and, in some parts of the world, not feasible in the first place because of the depth of the ocean along many coastlines. In the future, floating turbines will also generate electricity from wind in places where this has never been possible before.

Walkers passing an oxbow lake in the municipality of Geestland in the district of Cuxhaven last June were taken aback by an unusual sight: an 18-metre wind turbine with two rotors floating in the middle of the lake. Nezzy2 is the name of the research project of EnBW and Aerodyn Engineering. The energy company and the wind turbine manufacturer have teamed up to explore ways of generating electricity from wind in deep water areas. Until now, offshore turbines with monopile tubes weighing many tonnes or high-rise jacket scaffolding have had to be firmly anchored in the seabed. However, these systems come up against their limits at ocean depths of more than 50 metres - meaning that significant wind energy potential simply sinks without trace.

“Shallow coastal waters in which large offshore wind farms can be built are the exception rather than the rule globally,” says wind energy expert Simon Wiedemann from TÜV NORD. The specialist estimates that around 80 percent of the world's offshore wind resources are to be found in areas where the water is more than 50 metres deep. So, if wind energy is going to be exploited here, the systems need to learn to swim. With the model plant in Geestland, the floating foundation is connected to the lakebed via cables and an anchor. The wind turbines planned for use at sea will tower up to a height of about 260 metres. EnBW and Aerodyn plan to test these in the Baltic Sea and off the coast of China during the summer. 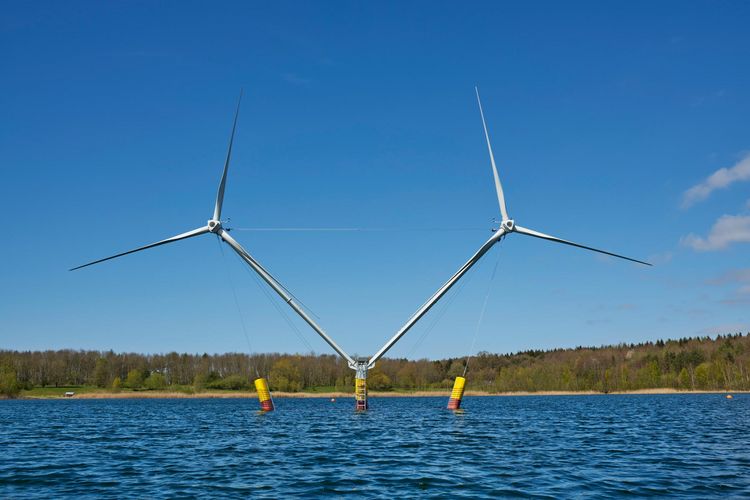 © Jan Oelker
Nezzy2 was tested on a lake in Geestland.

The seabed also falls away very steeply off the coast of Japan, Korea, India, Chile and the west coast of the United States. “There’s loads of potential there with relatively short distances to population centres, which is important when it comes to the transmission of energy,” says the expert Wiedemann. The shorter the path and, consequently, the power cables from the wind turbine to the consumer unit, the more economical it becomes to operate the floating systems.

In Europe, according to wind energy association WindEurope, it is the Atlantic coasts of France, Portugal and Spain which are suitable for floating wind turbines. According to the association's calculations, the overall European potential is 4,000 gigawatts – more than enough to supply the entire EU with clean electricity.

The floating technology is still in the testing phase. Hywind Demo installed the first pilot plant in Norway in 2009. Other pilot projects and prototypes have been launched off the coasts of Japan, Portugal and France. And the world's first commercial floating wind turbine first rose to its present towering height out of the North Sea some 25 kilometres off the coast of Scotland in the autumn of 2017:  Hywind Scotland consists of five 98-metre-high wind turbines, which, with a total capacity of 30 megawatts, provide enough electricity for around 20,000 households, according to operator Equinor. The turbines are kept upright and afloat by spar buoys. These are 91-metre-long and 14-metre-wide steel tubes weighing 2,300 tonnes with 5,000 additional tonnes of ballast as filling. Three suction anchors weighing 300 tonnes each keep the turbine in place. Each anchor is connected to the turbine via a 900-metre-long and 400-tonne iron chain. 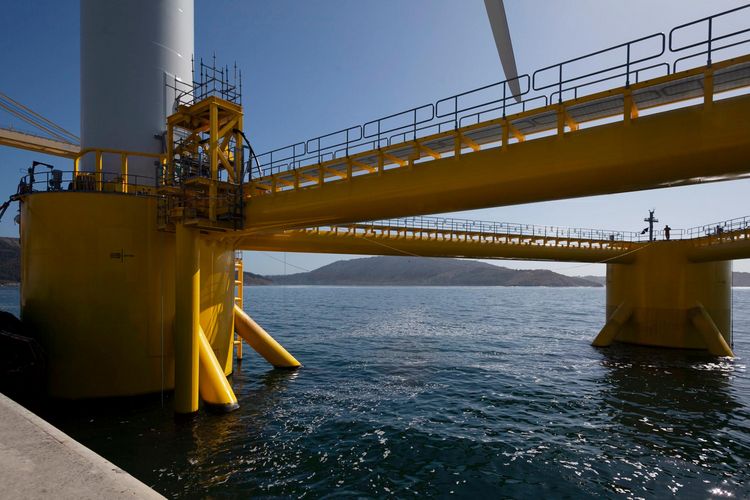 The WindFloat Atlantic project off the coast of Portugal relies on a similarly solid construction. It was there that a consortium led by the Portuguese energy supplier EDP commissioned the last of three 8.4-megawatt wind turbines. Together, they are expected to provide clean electricity to around 60,000 people.

The project is based on the WindFloat 1  prototype, which was in operation off Portugal between 2011 and 2016. The two-megawatt turbine produced energy for five years, undeterred even by 17-metre waves. WindFloat 1 was kept safely in place by a triangular steel scaffold. Such semi-diving platforms would also be able to carry the turbines of the 1,000-megawatt park that EnBW is planning with Trident Winds 30 kilometres off Morro Bay, California.

The advantage of such floating systems is that they can be assembled in port and towed to their destination or into dry dock for maintenance purposes by normal tugs. Unlike traditional offshore installations, no expensive special ships or complex construction work are thus required on site. Like Hywind's spar buoys off the coast of Scotland, however, they need much more expensive steel. It cost Equinor 200 million euro to build the wind farm on this site – the equivalent of 6.6 million euro per megawatt. In the case of a permanently installed offshore installation, depending on the location, one megawatt  of capacity can already be built  for between 2.4 and 4 million euro. 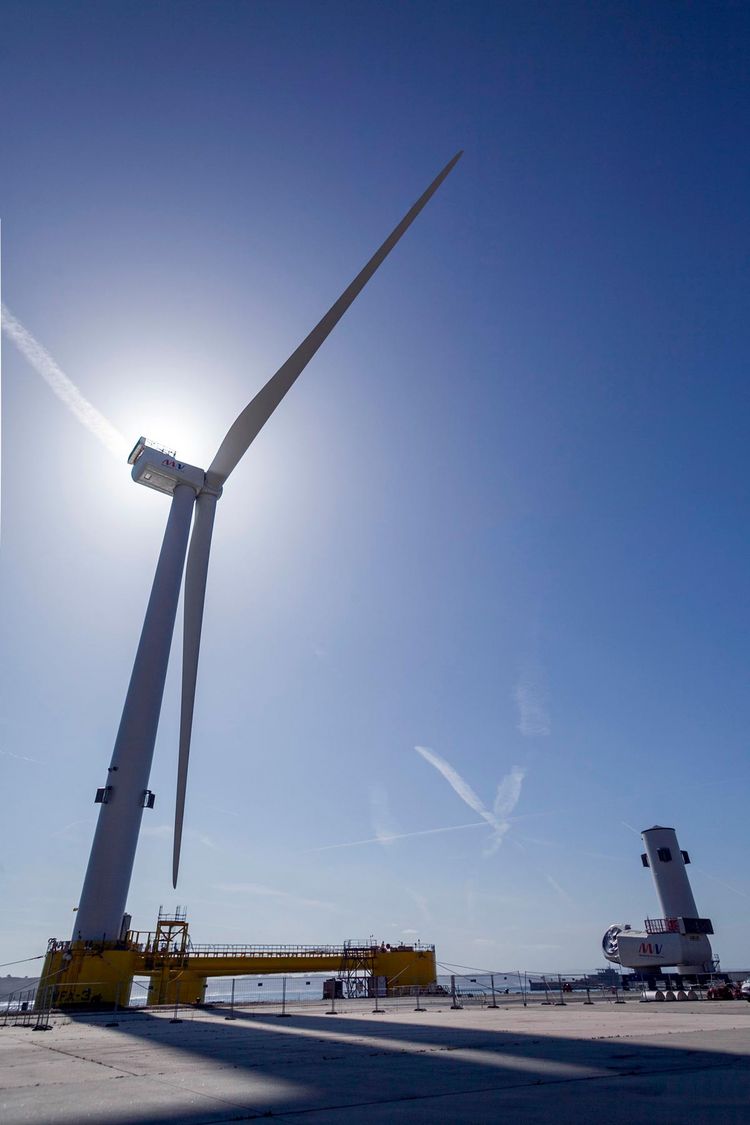 © edpr.com
One of three WindFloat Atlantic turbines off the coast of Portugal.

At the moment, therefore, floating wind energy is still about twice as expensive as that generated by anchored turbines. But this will change once the turbines start to be produced in larger quantities. “In the coming decades, the technology will be economically equivalent to conventional offshore plants – and, depending on the location, it could even be cheaper,” says wind energy expert Wiedemann with conviction. In addition to the scaling effects, further cost savings will be achieved through the design of other structural forms. The wind farms off Scotland and Portugal are based on the oil and gas industry's production platforms in respect of their steel-heavy construction. Here, however, the profit margin is much higher than in the wind energy industry, meaning that high investment costs are easier to compensate for. In fact, these first projects are intended above all to demonstrate that the floating wind turbines work, says Simon Wiedemann. “In the future, we’re increasingly going to see other concepts that are trickier in terms of technical design but have more potential for the future,” says TÜV NORD's wind energy expert.

Pyramids in the sea

The wind energy pioneer Henrik Stiesdal, is working, for instance, on a concept called TetraSpar: This is based on a radically simplified and industrially manufactured float shaped like a pyramid, with tower elements which take their cue from the cost-effective modular design of onshore systems. The price per kilowatt hour should thus drop to five cents. This would place floating wind energy on a par with the cheapest conventional electricity from lignite, which is produced in Germany for 4.5 to 8 cents per kilowatt hour. Wind energy expert Simon Wiedemann considers Stiesdal's concept to be promising in principle. “However, it has yet to be seen whether this will work well technically.”

One thing is already pretty clear: if they are going to be towed out onto the high seas, the structure of wind turbines is likely to have to change too. Instead of simply locking a normal wind turbine to a float that is made to be as rigid as possible, the turbines could in future be designed to follow the movement of wind and waves more closely without sacrificing performance. "However, a lot of research is still needed here to find a good balance between cost reductions in the foundation and better turbine dynamics,” says Wiedemann.

The TÜV-NORD expert and his colleagues are also involved in coming up with a future design to allow wind turbines to float safely in the water. In the international standardisation body IEC, they are involved in the development requirements for floating wind turbines. "Here, we’re working with the developers and concept designers from all the companies involved in these projects to advance this technology in terms of standardisation and certification.” 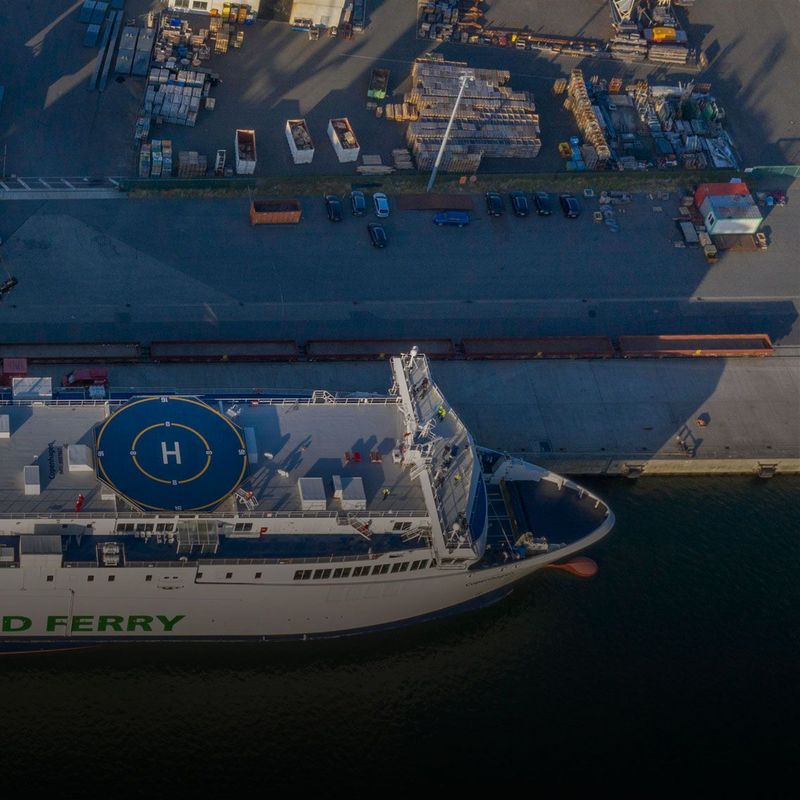 Cleaning up on the high seas 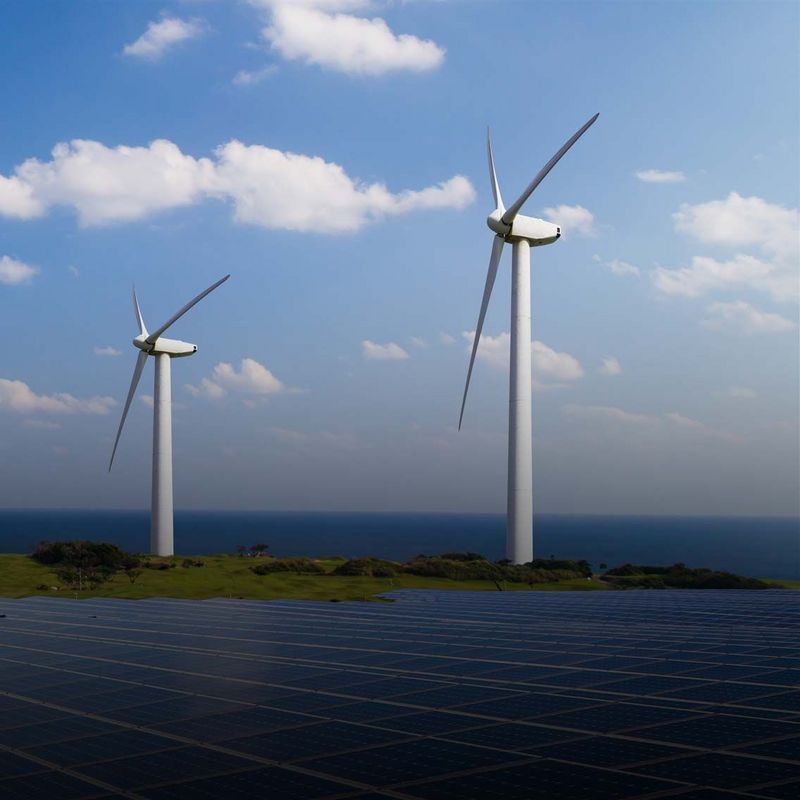 Simon Wiedemann is an expert in load calculation for wind turbines at TÜV NORD. The mechanical engineer has some pedigree in this area, having dealt with floating wind energy in his master’s thesis. At TÜV NORD, Wiedemann’s brief also extends to floating wind turbines in projects and policy work.