Security policy, cyber security, data protection and privacy: these are issues close to Isabel Skierka’s heart. The young political scientist is engaged in research at the Digital Society Institute in Berlin to find ways of making the digital future more secure. TÜV NORD is supporting her project with a grant.

Schlossplatz 1, Berlin-Mitte - if the city has a centre, then it is here. This is the site on which the East German State Council building used to stand. Where Walter Ulbricht, Erich Honecker and Egon Krenz used to come and go, the rooms are now full of aspiring managers swotting for qualifications.  This is because the imposing building, whose façade features an original portal from the Berlin City Palace, is now being used by the European School of Management and Technology (ESMT Berlin). The palace is currently being rebuilt right opposite the college.

While most the students at the ESMT use the magnificent front entrance, Isabel Skierka comes in through the back door. This is more practical, because her office is located in a small building connected by a corridor to the main premises. Everything is less showy here: glass doors connect the staircase and the long corridors, cold light shines on grey-white walls. Isabel Skierka stops in front of a partition wall and points to the two doors behind it. “This is our little bubble,” she says, meaning the Digital Society Institute (DSI). As it says on the website, the Institute aims to establish a connection between “digital networking and digital growth” and “digital caution”. Isabel Skierka and her five colleagues, including DSI Director Sandro Gaycken, his deputy Martin Schallbruch and Coordinator Shina-Nancy Erlewein, have come on board to make the Internet more secure and “to develop digital wisdom - a value-oriented strategy for digitisation”.

© Holger Talinski
Isabel Skierka is at home on the Internet: She regularly checks her Twitter timeline. She submits posts via Twitter on cyber security and follows the work of her colleagues around the world.
© Holger Talinski
2 von 3
Text ein-/ausblenden

Isabel Skierka’s office is behind the right-hand door. On the big desk with its four work stations, only one of which is occupied, are her computer, notebook, hole punch, pen holder, notepad and a solitary houseplant - “my office-warming plant”. The large, almost empty bookcase contains just four books: English-language literature on the issue of cyber security. Anyone looking to find out more about Isabel Skierka’s work will find more clues on the Internet than in her office. The profile of her Twitter account says this: “Researching the politics of information security and cybering.” Since July 2016, the 27-year-old scientist has been exploring how computer networks are protected from harm and how companies, governments or societies will in future be able to not only minimise but also manage the security risk posed by the Internet. Her particular focus is on the security of what are known as embedded systems, concealed in the form of mini-computers in many everyday objects in the era of the Internet of Things: heating systems, smartphones, navigation devices and entertainment technology. In industry, too - for example, in the control systems of waterworks - the small high-performance chips have become indispensable and are universally taken for granted. This is because Internet-based technology is practical and efficient - but it is also vulnerable to external hackers.

At home on the Internet

Isabel Skierka travels the world in her quest to develop ideas and concepts for a secure digital future. She attends seminars, speaks at conferences and meet scientists, government officials and entrepreneurs for background discussions. Skierka’s followers can track her travels via Twitter: There you will see photos showing the young woman as a guest at the NATO talks, gesticulating as she is surrounded by besuited gentlemen. Or she can be seen on stage with a microphone  - giving a lecture and hosting an event at the 4SICS, a conference in Stockholm on IT security. In her capacity as co-Chair of the Advisory Board of the German Internet Governance Forum, she will soon be participating in the global meeting of the organisation in Mexico, where she will be speaking on the subject of activities in Germany and taking part in debates on cyber security. At least once a day, Isabel Skierka retweets posts about security policy and digitalisation; she regularly also posts her own tweets and articles via SMS. One thing is crystal-clear: She is at home on the Internet. Before she checks her mails and starts work, she scrolls through her timeline looking for news from her sector.

“The link between technology and security interested me early on”

“The link between technology and security interested me early on,” says Skierka, who is a political scientist and not an engineer. Her master's degree in International Conflict Studies at the renowned War Studies Department of King’s College London was only completed, with honours, in 2012. The next ports of call in her career bear witness to Skierka’s ambition and her determination to make her own contribution to Internet security: a research fellowship at the Global Public Policy Institute think tank, a traineeship at the European Commission, a fellowship at NATO. Whatever Skierka does is honoured with accolades or rewarded with scholarships. And her job at the Digital Society Institute, too, is being financed by TÜV NORD. Young, female and successful in a male-dominated world of technology - all her success notwithstanding, Isabel Skierka hasn’t always had it easy in her job. “We urgently need more diversity in the cyber sector - not only women in the boardroom but, in particular, young staff of both sexes,” is the researcher’s rallying cry. Every now and again it happens that she isn’t immediately taken seriously by older, male colleagues and is called on more than most people to prove herself. But she is optimistic: “The industry knows about the problem. It will just take a little bit of time and dedication for real change to take place.”

Skierka’s time at the Institute is limited to three years. These she wants to use to hone her technical knowledge and work on her PhD on the topic of dealing with information security. If all goes well, she will have a doctorate in the bag by the time she hits her early thirties. What comes next is uncertain. But one thing she is sure of: The next port of call must once again have an international character. Why? “Well, it’s obvious: digital space doesn’t respect territorial boundaries.” More young researchers will be soon be supporting what has until now been a team of six and occupying the empty workspaces in Skierka’s office. The “bubble”, as Skierka calls the Institute, in terms bordering on affection, is growing.

Hackers in the house

Over the past week, one of the biggest-ever cyber-attacks has affected Spotify, Netflix, Amazon and Twitter. And the standout feature of this attack was that ... 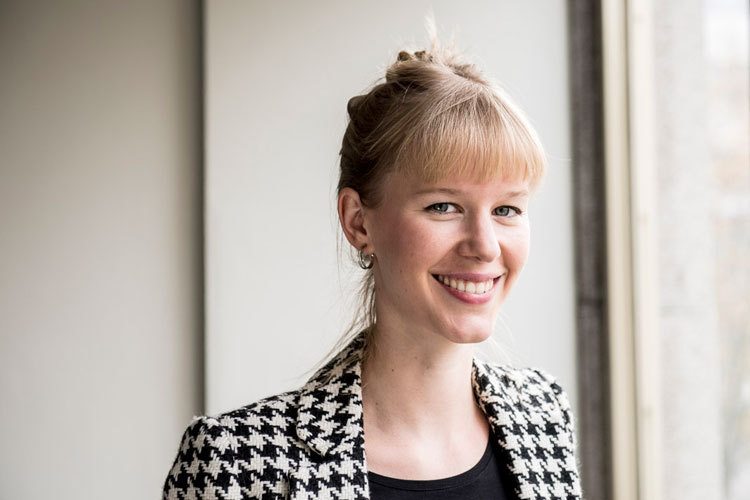 Isabel Skierka has been researching IT security at the Berlin-based Digital Society Institute since July 2016. TÜV NORD is supporting her three-year research work with a grant.She is also representing the young generation as co-Chair of the Advisory Board of the German Internet Governance Forum and is a non-resident fellow at the Global Public Policy Institute, at which she has been working with a small team to develop the ‘Data and technology politics’ programme. Other ports of call in her career include the European Commission and NATO, for which she supported NATO member states from her base in Brussels in the implementation of multi-national defence projects in the context of the “Smart Defence” initiative.