According to the Federal Association for Information, there is currently a shortfall of 55,000 IT experts in the German employment market. The ReDI School in Berlin wants to reduce this shortfall and at the same time promote integration. It offers refugees the chance to learn how to program and expand their digital skills.

Projector and screen are already in place. Now Claus Schaale and some helpers push the tables together, in front of the attractive brick wall. The participants open their laptops, and then the course on the “Internet of Things” can begin. For today, the Innovation Center of network equipment provider Cisco in Berlin has been transformed into an outreach site of the ReDI School, the “School of Digital Integration”.

With its main site in the inner city area of Berlin, the school is a non-profit organisation where refugees can learn how to program and expand their digital skills. “Most of those who study with us come from the IT sector. Many have a university qualification in computer sciences, for example a Masters degree, and some even have a PhD. The majority of our students also speak fluent English and relatively good German”, explains Schaale. Like Asma, for example, who is here today for the first time. From listening to Asma – an IT specialist from Syria – you would not think that she has only been in Germany for three years, and she also explains that previously she worked in a communications company for a considerable time. Now she wants to update her programming skills so she can again find employment in the area of IT. 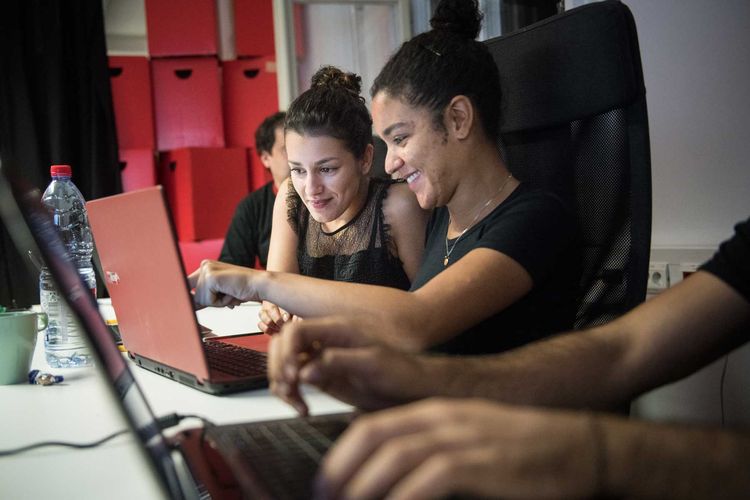 © Stefanie Loos
Digital is better: At the ReDI School, refugees learn programming, expand their digital skills and make contact with startups and companies such as Microsoft, Bosch and Cisco.

Contacts in the Tech Scene

Wasim Aboalola, who is just explaining to the students how smart glasses work, is already one stage further on. When he fled from Syria, he not only had to leave his wife and son behind, he also left his job in a bank, where he worked in IT. In Germany he started again from nothing. So Aboalola attended the ReDI School, then undertook a traineeship and as a result gained a position as a network engineer at Cisco, one of the companies which works with the school. These companies have not only given financial support, they also offer traineeships and provide voluntary instructors like Claus Schaale, who in everyday working life is responsible for Business Development. 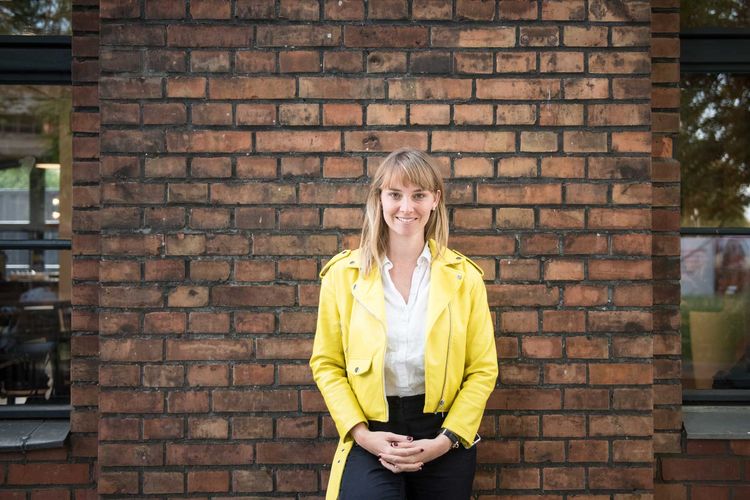 Claus Schaale, who is Chilean by birth, has himself never experienced war, the need to flee or being driven from his native country. But he has one experience in common with his students. “I have often worked in different countries. I know what it is like to have a strong network and then suddenly have to start again right from the beginning.” This is the gap which the ReDI School aims to fill – by arranging contacts with start-ups or companies such as Microsoft and Bosch while the IT courses are still in progress. “Because in the tech industries it is not only important what you know, but who you know”, says co-founder of the school Anne Kjær Riechert. The personal contact gained during visits to companies and networking events also helps to overcome unconscious prejudice on the part of human resources staff. For people who are not called “Smith” or “Jones”, or who wear a headscarf on their c.v. photos, are often still at a disadvantage when it comes to applying for a job in writing.

However, the need for IT specialists is enormous. There was a shortfall of 55,000 in 2017 in the German labour market, according to the Federal Association for Information. So for Riechert the ReDI School is an initiative which is good for everyone – refugees, society as a whole and also industry: “Germany needs successful integration, and German companies need talent in the IT sector.”

Talent like that of Sana Abo Helal. Before her flight from the war in Syria, Abo Helal had completed a Bachelor’s degree in computer sciences. When she came to Germany in 2016, she and her husband looked for opportunities to improve their skills – and came across the ReDI School, where she is attending the course led by Claus Schaale. And he recognised her talent very quickly. “Sana developed the first blockchain prototype which was created at Cisco in Germany”, explains Schaale, obviously still impressed. Where developers with decades of experience held back respectfully and were afraid to act, the 25-year-old simply got started. The idea: a website to facilitate hiring of networked equipment and the resulting data flows. “The hiring is automated and is carried out via the blockchain which communicates with the equipment“, explains Abo Helal. She is now undertaking a 12-month traineeship at Cisco, and her husband has also found work. “After only one year in Germany we are no longer dependent on social benefits, have found new friends and built up a network”, explains Abo. 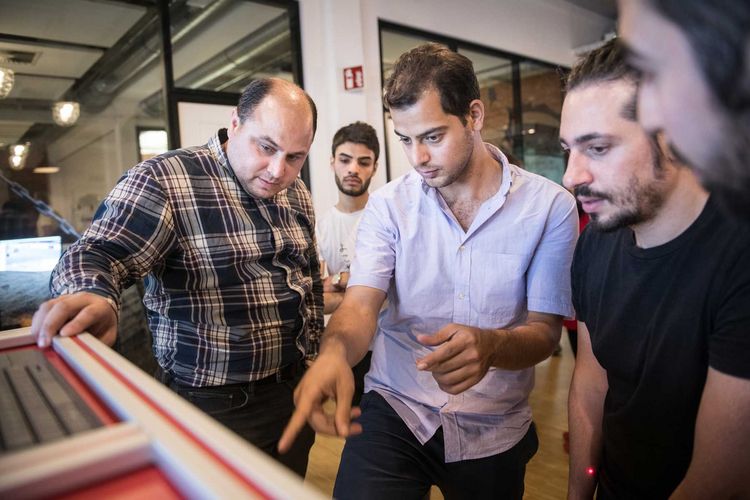 © Stefanie Loos
Hands on: Wasim Aboalola demonstrates the functioning of smart glasses and other network equipment to the participants in the ”Internet of Things” course.
© Stefanie Loos
1 von 3
Text ein-/ausblenden 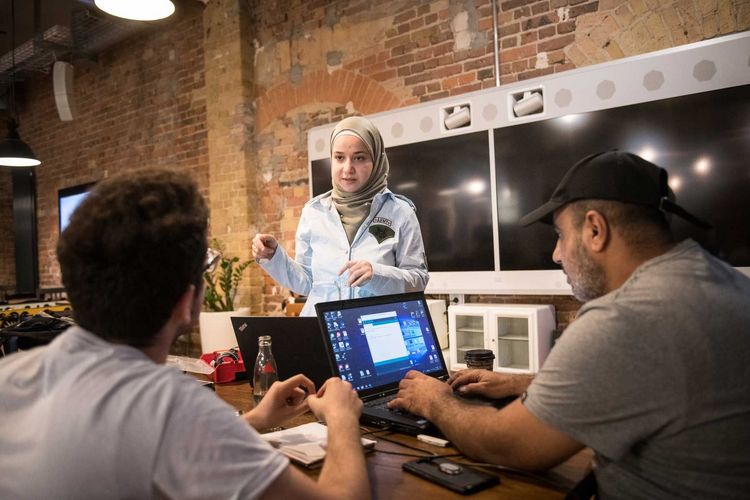 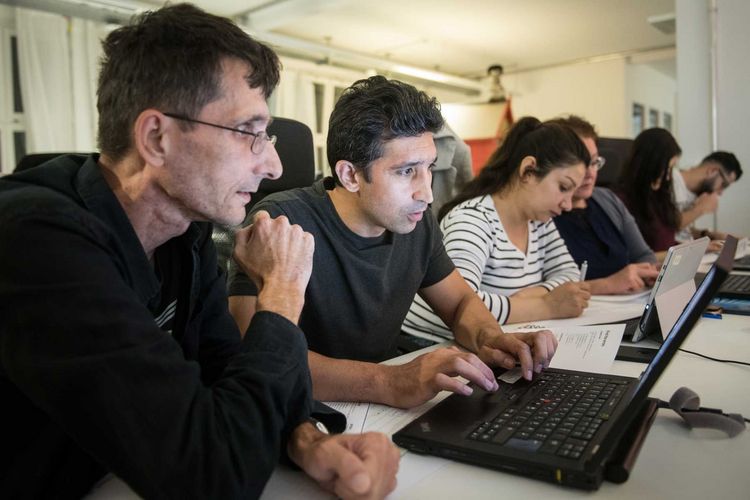 © Stefanie Loos
Volunteers to the fore: Around 250 coders, developers and web designers work on a voluntary basis in their free time at the ReDI School as teachers or mentors.
© Stefanie Loos
3 von 3
Text ein-/ausblenden

And Abo Helal is not a unique case. It was only in September 2018 that Riechert and her staff asked 350 former students of the school what they have achieved up to now. Around half responded to the survey. And around 80 per cent of these are either in paid employment, have a traineeship or work as freelancers or entrepreneurs. Twenty per cent have registered at university again in order to continue their studies which had been interrupted, or to do a Masters’ degree. “Those who have not yet found work usually continue working with us until they have the skills to return to university or get a paid job”, explains Riechert.

A programmer without a laptop

Riechert had the idea of establishing the ReDI School as a result of getting to know a software engineer from Baghdad, whom she met as a refugee. His problem: he had not had a computer of his own for two years. In order not to fall behind in his profession, he was working at computers in public libraries. But these were old, slow and constantly in use by other people. Riechert looked for a way of finding a more fundamental solution to his problem – and working with others, established the ReDI School. An appeal for funding at the “Long Night of the Startups” in Berlin brought in the first donations of laptops, which were used to start teaching a pilot class in autumn 2015. The school was officially launched in February 2016 with 42 students. 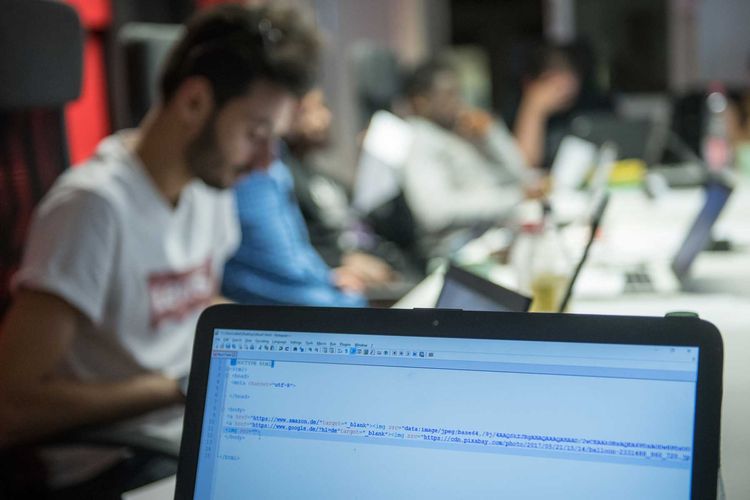 © Stefanie Loos
Programming means shaping the world around us: Almost every aspect of life is pervaded by program codes.

And now, two and a half years later, around 400 students are working hard to learn Java, Python and CSS. 150 of these are in Munich, where the school opened a branch in the summer of 2017. They are taught by voluntary coaches and mentors from the tech sector, who in their day jobs mostly work as coders, developers and web designers. There are also German nationals amongst the students, who would otherwise not be able to afford a coding bootcamp like this. “We are a school for digital integration – and this works best when Germans learn and work alongside new arrivals”, says Riechert, who was born in Denmark. And if she gets her way, schools will also be opening in Hamburg and Frankfurt. There is certainly huge interest in the concept. Every couple of days a new enquiry lands in her inbox asking if she would like to open a school in Korea, Brazil or Jordan. Chancellor Angela Merkel has already visited the school, and so has Facebook founder Mark Zuckerberg.

An App to navigate the maze of officialdom

In addition to concrete programming skills and personal contacts, the ReDI School wants to communicate the core skills required by the tech sector to the digital jobseekers. “The most important prerequisite is the ability to develop creative solutions for concrete problems. Therefore we also see the ReDI School as a platform for creative problem solving.” This is why a design thinking workshop is generally held at the start of a course module. Here, the participants consider the question “What is my greatest challenge in everyday life and can I develop an App or a website in order to solve the problem?”, says Riechert. 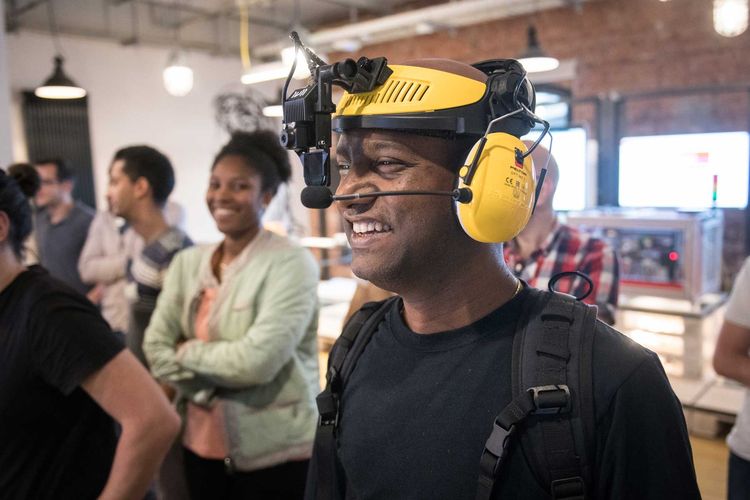 © Stefanie Loos
Smart glasses do not remain a theoretical tool, but can be experienced in reality – thanks to the financial support of various companies.

The greatest hurdle in everyday life for Munzer Khattab is quite clear ... German bureaucracy. And so he and five others have launched Bureaucrazy: an App and a website which intend to find a way through the maze of officialdom by having application forms and explanatory notes translated – and where, in a kind of document tracking system, it is possible to see when and where which documents have to be submitted for specific applications, the time it will probably take for the application to be processed and the steps that are necessary afterwards.

An idea which is not only popular with a great many refugees. As the project was publicised by different media, many Germans have also reported an urgent need for such an App to help them avoid pitfalls when dealing with official bodies, explains Riechert. “For me this is a wonderful example of how refugees come in with fresh eyes to discover possibilities and develop ideas which can help everyone.” 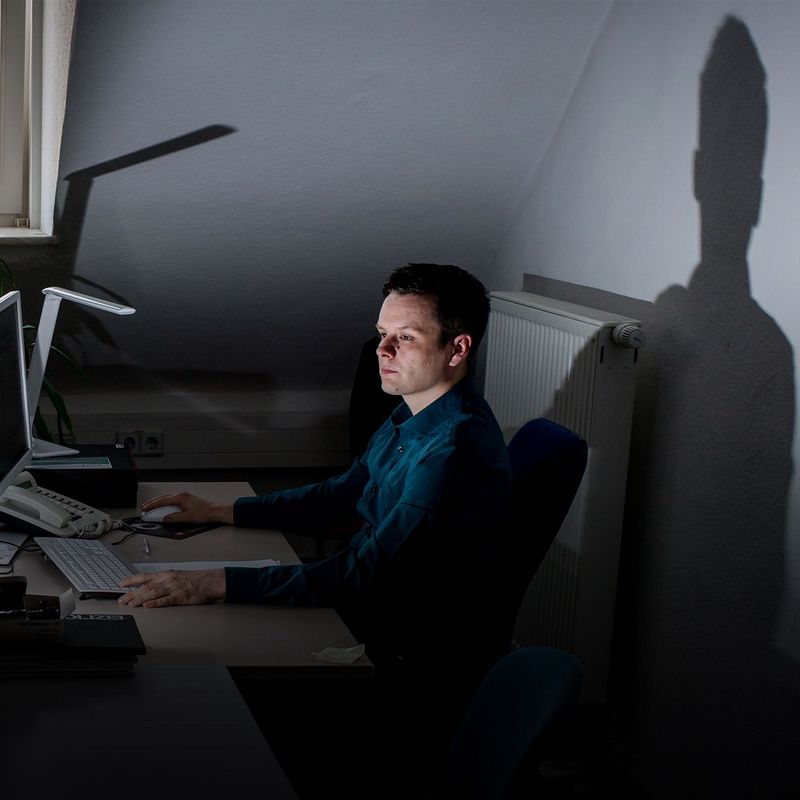 Cyber Cops: Hunting for criminals on the World Wide Web

Send reinforcements! The police rely on the support of their Cyber Cops in the fight against crime on the Internet. #explore visited the Saxony State Office of Criminal Investigation. 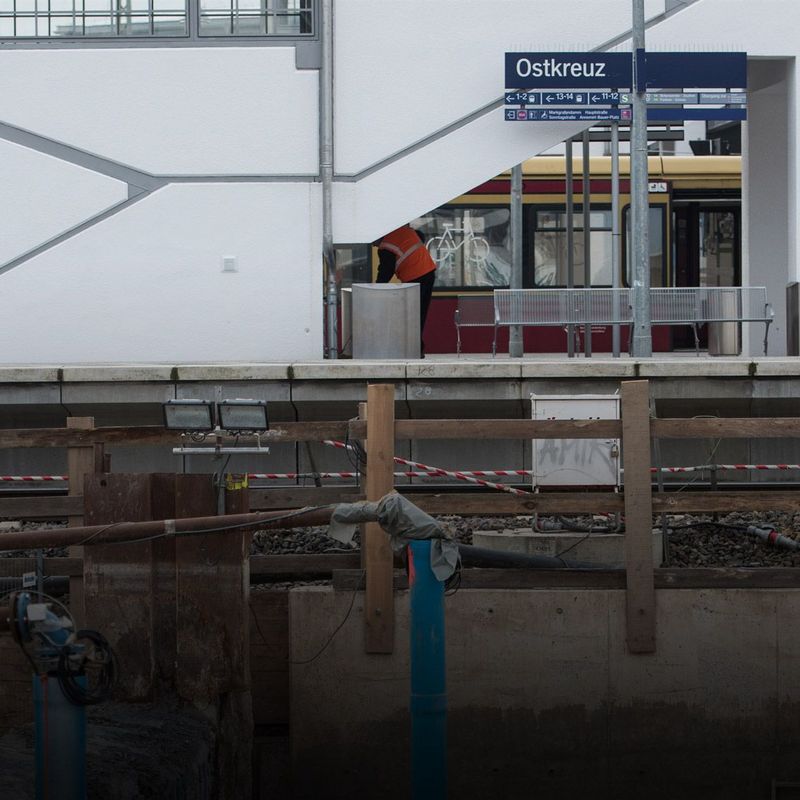 The groundwater managers of Berlin’s Ostkreuz

In the Ostkreuz construction project, it’s the job of the geologists and hydrologists of TÜV NORD subsidiary DMT to maintain a consistent groundwater level. A visit to the construction site.