IT should be an obligatory subject for every child – that’s what the “can do” experts at the Hacker School believe. But because some schools within the conventional education system do not invest sufficiently in the digital future, the software experts prefer to work with the next generation themselves. Programmers and software developers are using their leisure time to teach children what they have to know about Raspberry Pi, Scratch, Minecraft and Java.

“Do you already know how to write a program?”, asks Ben Brunzel. “Nope”, answers Finn, who is 14 years old. “Our school can’t afford the hardware we need”. His companion who is sitting next to him, eleven-year-old Max, nods and says: “I have no idea about programming, but I really want to find out.” One chair further along, Ben-David, thirteen, sits up and says that he has already tried out a couple of things at the PC because his father “has something to do with the media” and thinks his son should develop digital skills. 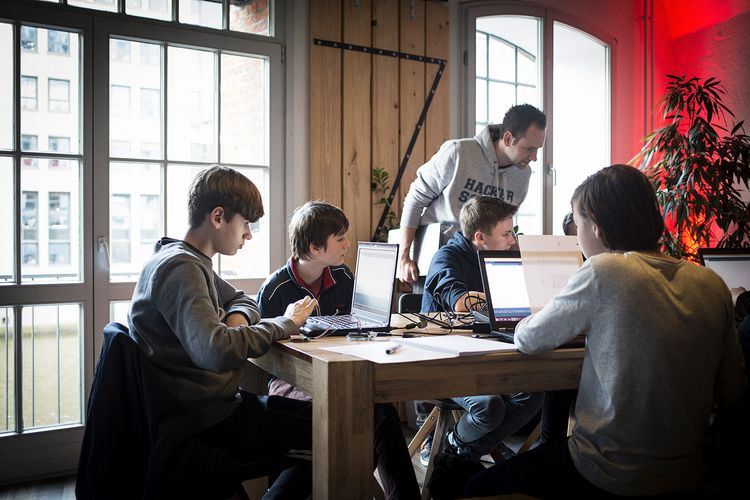 © TÜV NORD
Software developer Ben Brunzel passes on his know-how to the younger generation at the weekend. Children can learn from him how to control an LED screen using a controller and codes they have written themselves.

During the week, Ben Brunzel works as a software developer. Today, on Saturday morning, he is teaching at the Hacker School in Hamburg – as a volunteer. Together with his colleague Leon Jordans, the twenty-nine year old has built an unusual monitor – starting from a drinks crate, empty glass bottles, LED lamps and a couple of metres of cable, a display has emerged that can be made to function via code and controller. And today at the Hacker School, Finn, Max and Ben-David are to learn exactly how it works.

IT is just as important as maths and English

Three years ago, David Cummins, Timm Peters and Andreas Ollmann created this special school as a “social business”. At that time, the Hamburg education authority was considering whether IT is really essential as an obligatory subject for all pupils. “Disastrous”, is the single word that Andreas Ollmann uses to sum up his feelings on the matter. Like his two colleagues, he is a successful entrepreneur in the IT and media sector. All three of them are convinced that, in the digital 21st century , IT is just as important as a fixed part of the school curriculum as maths, English or history. “We want to communicate what keeps the innermost life and soul of the digital world together”, says Ollmann, echoing Goethe’s Faust and explaining why this theme is so close to their hearts. The trio were not happy simply to complain about the situation, instead they chose action: “We are entrepreneurs, so let’s do something about it!” – and the idea of the Hacker School was born. 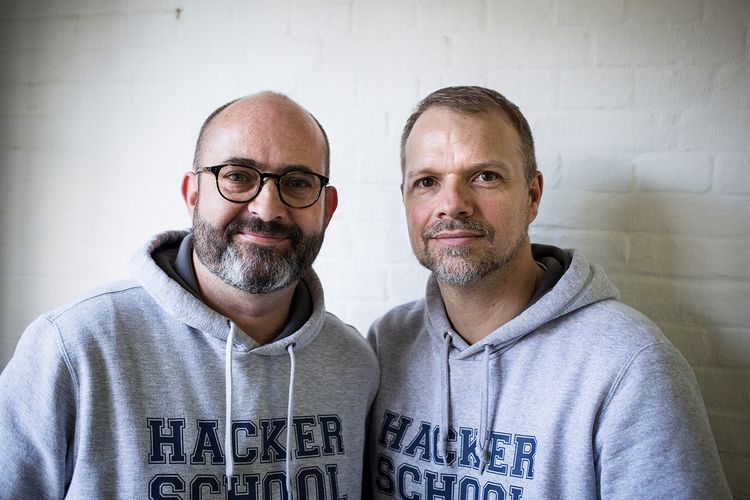 © TÜV NORD
Entrepreneurs David Cummins (left) and Andreas Ollmann were the founders of the Hacker School together with Timm Peters.

So they asked around in their network of friends and colleagues to find out who wanted to commit some time after work to the younger generation – by offering IT courses for school pupils. The response was overwhelming. The Hacker School now has 60 “Inspirers” on its website: professional developers and programmers – like Ben Brunzel and Leon Jordans – who want to spend some of their leisure hours passing on their knowledge to the next generation. The seminars are directed towards children and young people between the ages of eleven and eighteen. No special prior knowledge is required and nobody asks about grades in maths or physics either. “It is incredible how much motivation and enthusiasm the children have and how they are prepared to learn new things and concentrate completely on the courses we offer”, reports Andreas Ollmann, who more or less acts as the Director of the Hacker School.

The new concept is working

Recently the school has started offering the courses in concentrated form over the weekend. More than 80 children, including ten girls, listen closely to the short presentations of the teachers and then have to be divided amongst the different courses. Ollmann’s worries turn out to be unfounded – the new concept is a success: each child has decided in favour of one of the three seminars on offer. On the timetable today: the LED course of Ben Brunzel and Leon Jordans, the programming languages Scratch and JavaScript, the small single board computer Raspberry-Pi and the computer game Minecraft. 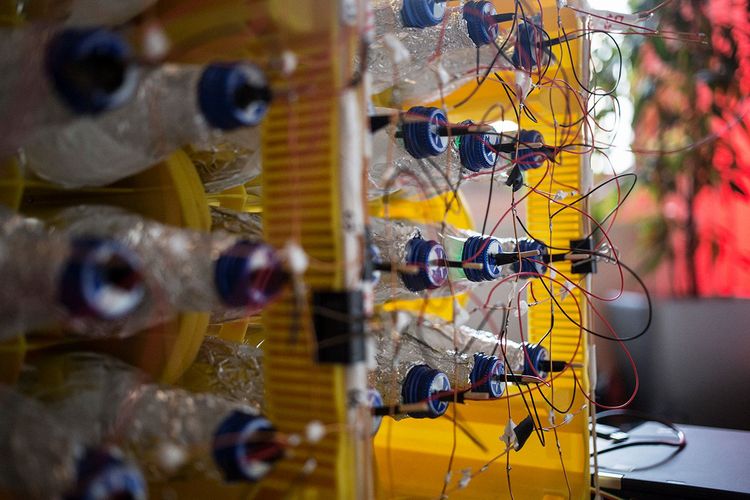 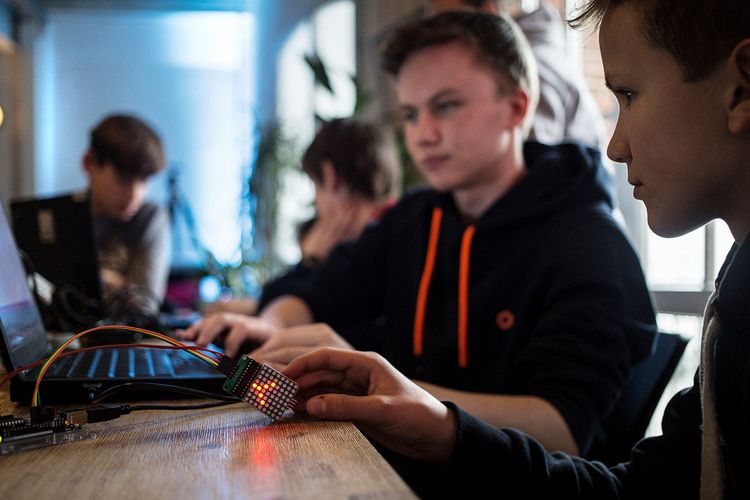 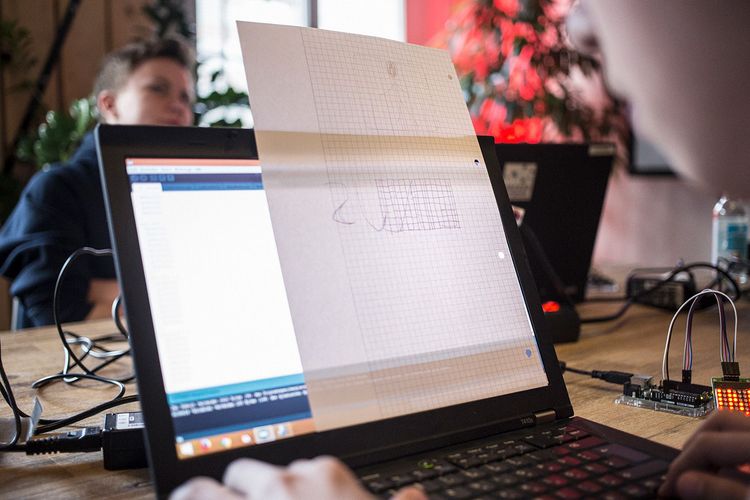 © TÜV NORD
“As professional programmers, we too have to be able to follow unconventional and creative pathways”, says teacher Ben Brunzel. The IT professional loves the idea of one of his pupils, who is tracing from the screen to write the programming codes for the bottle display.
© TÜV NORD
3 von 7
Text ein-/ausblenden 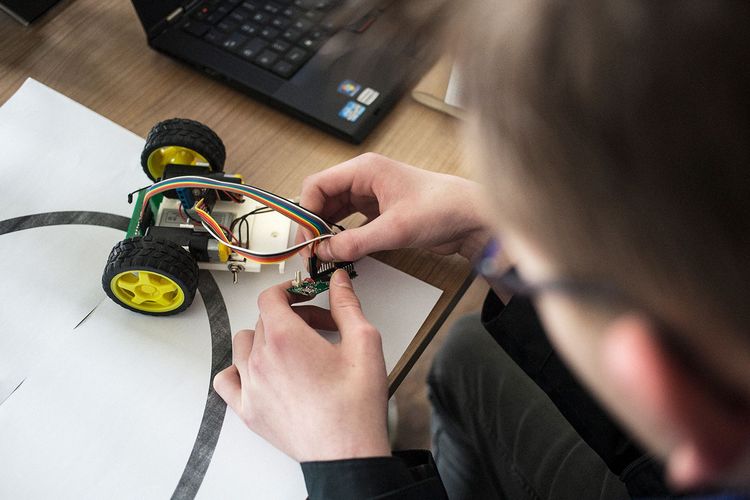 © TÜV NORD
Thanks to its infrared diode, this small auto robot can differentiate between black and white. At the Hacker School, the children write codes which make the robot travel along the black line with the click of a mouse.
© TÜV NORD
4 von 7
Text ein-/ausblenden 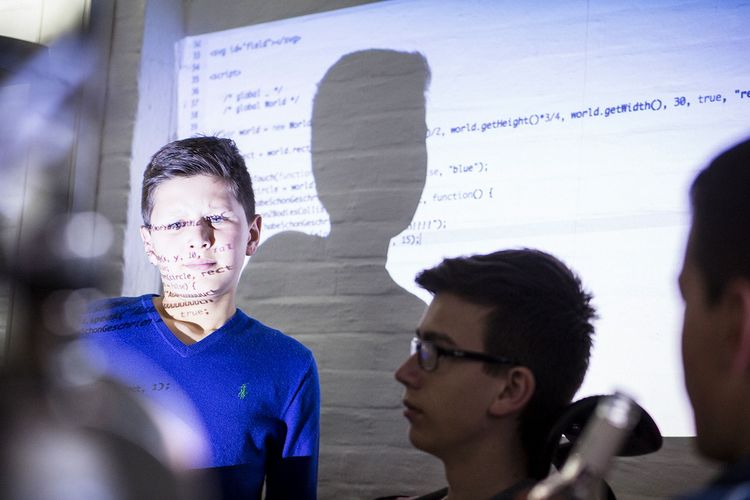 © TÜV NORD
JavaScript is a programming language for professional software developers. But even the youngest pupils at the Hacker School are learning how to use it to create their own computer games.
© TÜV NORD
5 von 7
Text ein-/ausblenden 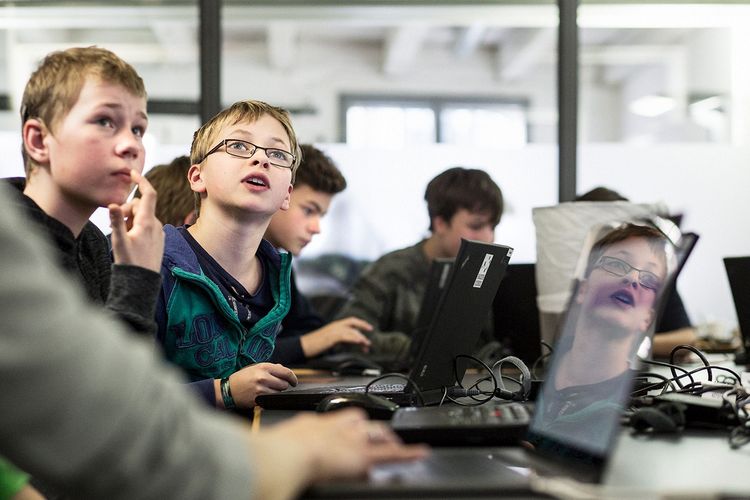 © TÜV NORD
The Minecraft course is one of the most popular seminars at the Hacker School. Instead of simply chasing zombies and building castles, the children are working on their own plugins – quite a demanding task, as the basis is the English programming language JavaScript.
© TÜV NORD
6 von 7
Text ein-/ausblenden 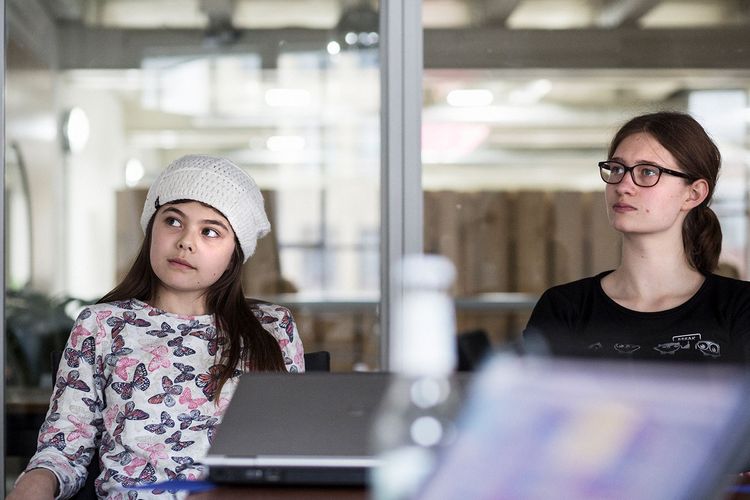 © TÜV NORD
More than 80 children have registered for the Hacker School – including ten girls. Andreas Ollmann is pleased: “We have never had so many before.” In future they would like to welcome even more girls to the school.
© TÜV NORD
7 von 7
Text ein-/ausblenden

The majority of the children come from Hamburg and its near environs, but Kiron, from Lienen, nearly 300 kilometres away in North Rhine-Westphalia, is also there. Together with his Dad, Benjamin Kepp, he has travelled to the Elbe region over the weekend – and the duo of father and son are even spending the night in a hotel so they can attend the Hacker School. “Kiron is mad about computers and wants to learn more. And I simply hope that he has a great time here”, says Benjamin Kepp. Kiron is in the Raspberry-Pi course and is learning how much the mini computer has to offer. Benjamin Kepp would have enough time to explore the Hanseatic City of Hamburg itself, but instead, he stays at the school and assists with the Minecraft seminar, as teacher Benedikt Stemmildt would otherwise have to tackle this most popular of all the courses on his own. But instead of hunting zombies and creating new worlds, the children are learning what is behind the popular game. “Minecraft was developed in Java, a demanding high-level language for professional software development”, explains Ollmann. And now children create plug-ins to make their game characters jump higher and have zombies ride on cows. And of course the kids can take their own software extensions home and try them out for themselves on their tablet, PC or smartphone.

And while all this is going on, green lights begin to blink in the crate-cum-monitor created by Ben Brunzel and Leon Jordans – the 40 bottles with their LED bulbs light up in sequence and create patterns which Max, Ben-David and Finn have programmed in at the PC. A boy from the course grabs a notebook with squared paper, places a sheet on his PC screen and traces the features of the pattern displayed there with a pencil. He then transfers the tracing into the programming language, so that the glass bottles display the pattern he has designed. Ben Brunzel takes his mobile from his pocket and secretly takes a photo. “As professional programmers, we too have to be able to follow unconventional and creative pathways”, he says and is delighted with what he sees: for Ben, the Inspirer and software expert, is not only passing on his knowledge today. He is also learning from the next generation. 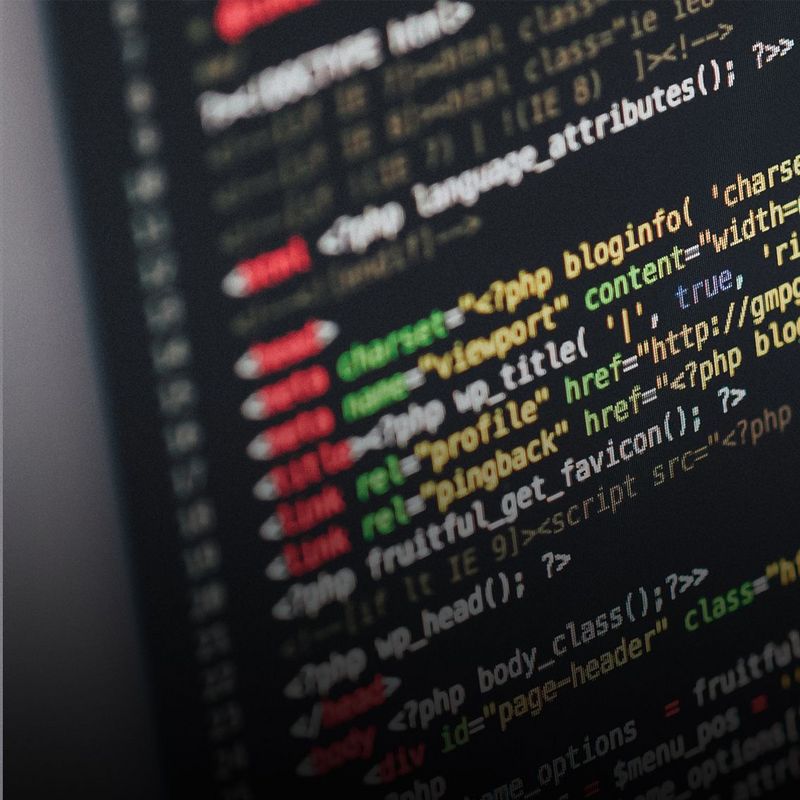 WannaCry: What you need to know about the cyber-attack

The cyber-attack with the ransomware known as "WannaCry" has been infecting computers throughout the world with a crypto-trojan which encrypts and then locks the data of the affected computers. #explore answers the most pressing questions: 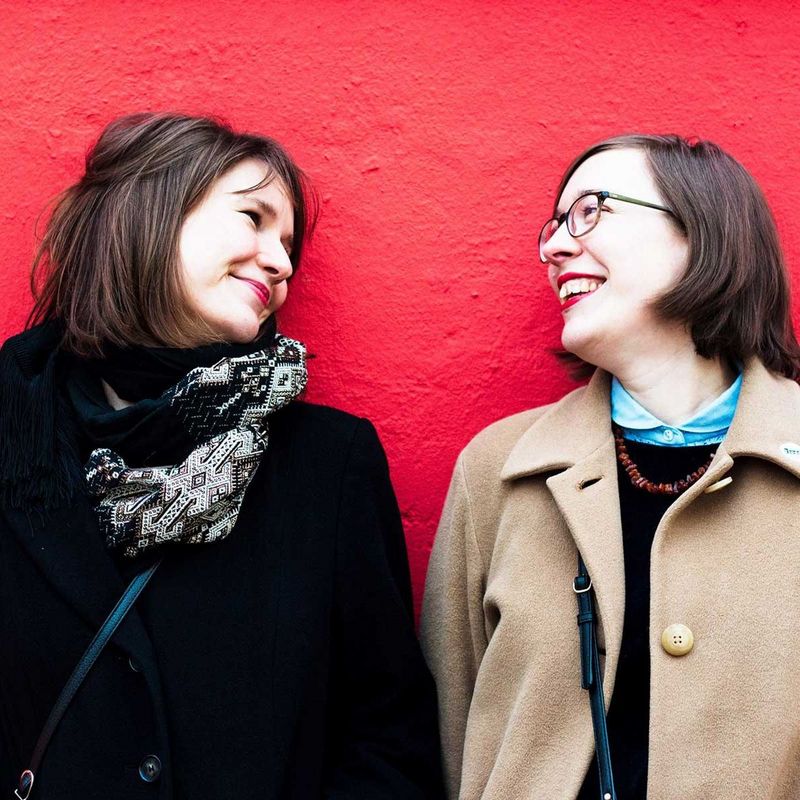 Natalie Sontopski and Julia Hoffmann are the ‘code girls’: They organise free programming workshops and talks exclusively for women.