The idea is for hydrogen to power ships and lorries in a more environmentally friendly manner and to replace coal and oil in the steel and chemical industries. With the National Hydrogen Strategy that was adopted last June, the German government plans to secure for itself a global leadership role in hydrogen technology and to kickstart industrial production. The lightest element in the universe could indeed also be produced at sea one day.

At first glance, the enormous structure is reminiscent of an ordinary drilling platform. However, instead of pumping natural gas or oil out of the seabed, this 50-metre-high platform produces “green” hydrogen. Transformers and electrolysers, which are supplied with fresh water by desalination plants, are in some cases stacked up to ten storeys high. This water is split into oxygen and hydrogen by electrolysing machines. The power needed for the process is generated by the wind turbines that tower up into the sky around the platform. Pipelines or tankers are then deployed to ferry the hydrogen to the shore, where it will then be used to make transport and industry greener - this, at least, is the concept that was presented at the end of 2019 by Hessian engineering firm Tractebel. 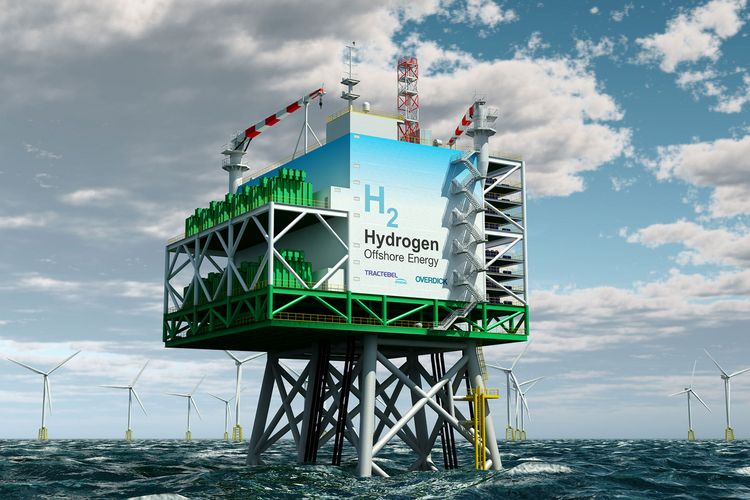 © Tractebel Overdick
So far still theory: the concept of Tractebel.

The engineers are the first to admit that the construction and operation of electrolysers on the high seas will be more expensive and difficult than it would be on land. And yet, they believe that the direct transformation of wind power into hydrogen offers a number of advantages: Green electricity and hydrogen will be produced in exactly those places where the wind blows especially strongly and constantly. This local conversion could also take some of the pressure off the electricity grids and, above all, reduce the costs of connecting offshore wind farms to those grids, which currently account for up to 26 per cent of all the energy production costs associated with offshore wind. “The added costs of an electrolysing platform at sea will be more than offset by the elimination of the investment costs for grid connection,” says Tractebel engineer Felix Knicker, with conviction, to Spiegel Online. And the further away the wind farms are from the mainland, the better the balance sheet for electrolysis on the high seas looks.

Until now, the hydrogen platform has only existed on paper. However, Tractebel maintains that a number of companies have already signalled their interest in the concept. In the Netherlands, they have taken things a step further. A consortium of companies from the oil and gas industry has teamed up with research institute TNO with the intention before the year is out of installing a pilot plant on a former oil rig about 13 kilometres off the coast at Scheveningen. They plan to build an electrolyser with an output of one megawatt, which is scheduled to go into operation in 2021. Hydrogen production on an industrial scale is still a long way off, of course. However, the initial focus of the project will be on gaining experience of the technology. If the trial succeeds, large numbers of elderly or retired oil rigs could then be pressed into service again with a new and green purpose. As the initiators have it, the need for the costly demolition of the platforms and the installation of expensive electricity cables would then be eliminated at a stroke. After all, drilling rigs are already connected by pipelines to the mainland, and these could be used to transport the hydrogen directly to consumers.

Danish island dreams in the North and Baltic Seas

The most ambitious plans for hydrogen on the high seas are currently being hatched in Denmark. By 2030, this Scandinavian country aims to have reduced its CO2 emissions by as much as 70 percent in comparison to the 1990 baseline. What are being styled as “energy islands”, which the Danes intend to construct off their coastline by the end of the decade, will have a key role to play here. The plan is to erect wind farms around these islands; on the islands themselves, electrolysers and Power-to-X plants will then be built to convert the hydrogen into synthetic fuel.

One of these energy islands will take the form of an artificial construction in the North Sea and will have a wind power capacity of 2 gigawatts, to be expanded at a later date to no fewer than 10 gigawatts. The second energy island, by way of contrast, will be of natural origin, meaning that the island itself already exists: according to the plans of the Danish government, Bornholm is to be converted into an energy node, whose wind power capacity will likewise be increased by two gigawatts.

With these two-gigawatt islands, Denmark would more than triple its existing wind energy capacity at sea, which is currently around 1700 megawatts - more than enough to supply every household in the country with energy. The idea is therefore not only to use the electricity produced at home or to convert it into green hydrogen but also to export it to other EU member states. Bornholm will first of all be connected by cable to Poland. The artificial island in the North Sea, which will go by the name of “VindØ”, will feed into the Dutch electricity grid.

This pioneering project is indeed already taking concrete form. In May, two Danish pension funds and domestic energy provider SEAS-NVE announced their intention of investing the equivalent of some 54 million euros in the development of “VindØ”. The island is to be built on concrete floats about one hundred kilometres off the coast. The consortium is convinced that, although the project is large and ambitious, it can be realised using existing technologies and largely without injections of cash from the state.

In Germany, too, a course has been laid in with hydrogen as its destination. With the National Hydrogen Strategy that was adopted in June 2020, the German government intends to establish the CO2-free gas as the “energy carrier of the future”. The intention is to provide funding to the tune of seven billion euros for research and the construction of production plants and fuelling infrastructure. There are no initial plans to build electrolysers on the high seas - the focus is instead on areas close to the coastline, directly adjacent to offshore wind farms. As the first “real-world laboratory” for hydrogen technologies, the “Westküste 100“ project was granted a subsidy of 30 million euros in August by the German economics ministry.

A consortium consisting of the Heide refinery, Thyssen Krupp, gas grid operator OGE, Danish electricity producer Ørsted and other partners intends to generate green hydrogen using marine wind power in the district of Dithmarschen in Schleswig-Holstein. The 90-million-euro project could play a part in establishing Germany as a technological leader in the hydrogen field, says German economics minister Peter Altmaier. 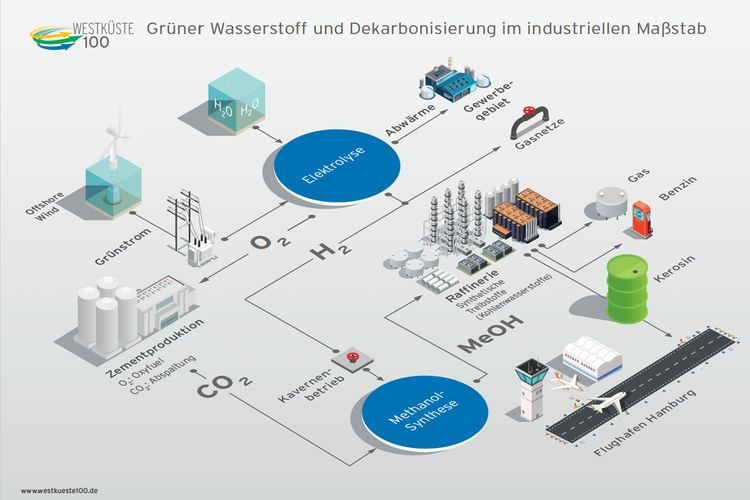 © Johannes Hofmann/WESTKÜSTE100
Will hydrogen be produced at sea in the future?

The idea is to gradually build up a regional hydrogen economy in Dithmarschen to an industrial scale. In a first step, the project partners are planning to build electrolysers with a total power rating of 30 megawatts. The hydrogen produced there will be fed into the gas network, stored in caverns and used in the production of eco-friendly jet fuel.

Unlike the Danish energy islands, in this five-year phase the plants won’t be connected directly with wind turbines but instead with the normal electricity grid. The electricity for hydrogen production will be purchased from offshore wind farms. Siting the plants close to those offshore wind farms should help take the strain off land-based power grids. In the longer term, the project partners intend to ramp up electrolytic output to 700 megawatts. The electricity needed for this could be sourced from coastal wind farms to be built from scratch in the North Sea. 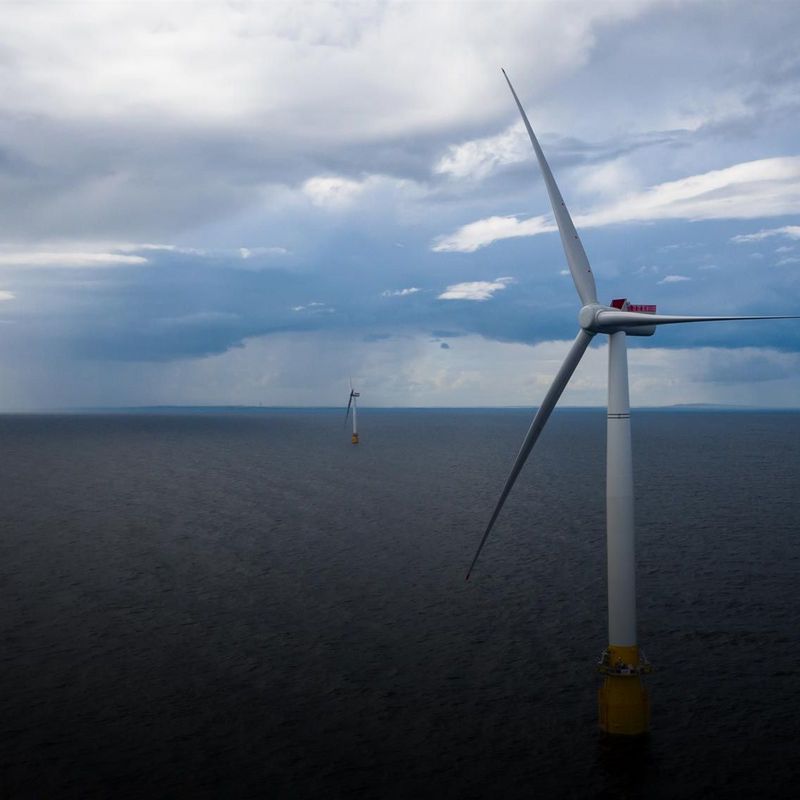 Out at sea: Floats for wind turbines

How wind turbines are learning to swim. 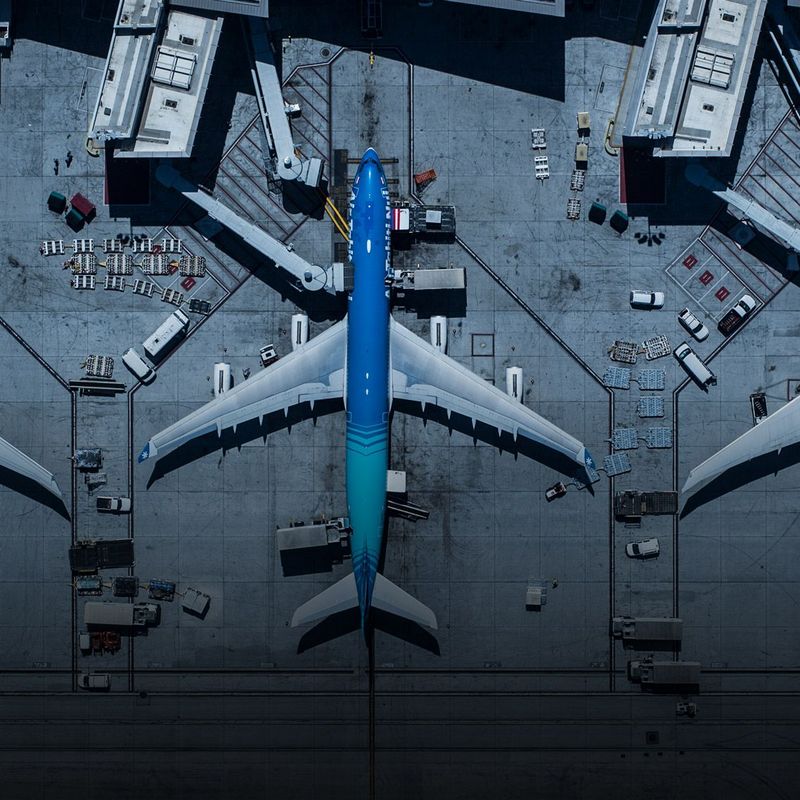