They are already being trialled in Bad Birnbach in Bavaria, at Frankfurt airport and on the EUREF campus in Berlin: autonomous buses that take you to your destination without a human driver at the wheel. Railway and transport operators alike set great store by the automation of public transport. If all goes to plan, driverless means of transport will make it possible to run services more frequently and encourage more people to make the switch to public transport. The second part of our series Mobility in Cities sheds light on how this could work.

The future of urban transportation looks like a ski gondola on wheels, requires neither a steering wheel nor an accelerator pedal and goes by the name of Emily. Emily is a type EZ10 autonomous minibus from French company EasyMile. The electric bus is currently waiting for its next journey opposite the solar charging station in front of the entrance to the Innovation Center for Mobility and Societal Change (InnoZ) in Berlin. The six passengers make themselves comfortable on their seats, and the back-up driver, who can, if need be, intervene to control the bus with his joystick, climbs on board. The sliding door closes, and Emily trundles off. Its cameras, GPS and laser and radar sensors guide the bus and produce a three-dimensional image of its surroundings that is then matched with the programmed route.

Emily cautiously moves past the brick buildings and parked electric cars at a sedate 10 km/h. “Just like a very cautious driver,” comments one of the passengers, stressing the “very”. This is due to legal retrictions and the speed limit in force on the campus. From a technical point of view, Emily would be capable of reaching 45 km/h. In the Lower Bavarian town of Bad Birnbad, the EasyMile shuttle is limited to 15 km/h. Since the end of October 2017, it has been ferrying passengers between the town centre and the spa, thereby becoming the first robot shuttle to be deployed in public transport in Germany. Deutsche Bahn, which saw the pilot project onto the road, drew some positive interim conclusions in May 2018. Since the project launch, some 10,000 passengers have been ferried over a distance of about 5,000 km without a single accident. Another vehicle will be added in the late summer of 2018, shortly to be followed by the next generation of the shuttle, which will be better able to cope with inclines.

The leisurely speed is due to legal retrictions and the speed limit in force on the campus.

Rail operator, public transport companies and the InnoZ researchers alike hold out great hopes for the robot buses. In spa resorts like Bad Birnbach or in urban pedestrian zones, the small, quiet and environmentally friendly electric buses will in the future conveniently be able to ferry people also to places where no urban bus has gone before. The basic idea is for the robot buses to supplement rather than replace existing urban transport systems. By reducing the distance between people’s front doors and bus stops, they will bridge the gap that passengers come up against in what is referred to as the last mile. According to InnoZ project manager Frank Hunsicker, this will create new possibilities which will not be restricted to senior citizens and people who aren’t able to walk very well. The big idea is to inspire more and more people to switch to buses and trains and to combine the convenience of private cars with the efficiency of local public transport. This is particularly critical in outlying suburbs where buses and trains run less frequently and the distance to the next stop is greater. Experts such as Hunsicker see particular potential for the use of robot shuttles in rural areas where cars are currently indispensable if you want to reliably get from A to B. “In these places it would be possible to offer accessibility of a completely different calibre or public transport worthy of the name,” Hunsicker says. After all, the biggest cost factor involved in operating a bus route, especially in rural areas, is the driver.

If Frank Hunsicker and his colleagues get their way, it will also be possible to simply use an app to order a bus on demand whenever and wherever you want rather than being tied to fixed departure times and routes. For passengers, this means more flexibility; the benefit for the operator is better capacity utilisation. The relevant app is already under development. First tests are scheduled for the summer of 2018. The robot bus is also being prepared at the InnoZ for the use of inductive charging technology. At the end of a shift or during breaks, the vehicles could independently head toward parking spaces kitted out with inductive charging plates, like the ones installed at the solar charging station in front of the Institute. This would save on personnel and make the operation of autonomous shuttle fleets more efficient. In the near future, Emily is also scheduled to leave the private premises of the EUREF campus to venture forth into Berlin’s urban traffic. The authorisation required is being prepared. In the first step, technical inspection services such as the TÜV have to subject the reliability and behaviour in traffic of the robot bus to detailed scrutiny. Approval of the shuttle for road use will always be linked to a specific route to which it will be restricted, says Hunsicker by way of explanation of the complex procedure. As and when the authorities give Emily their blessing, the shuttle might for instance be pressed into service as a shuttle to and from Berlin’s Südkreuz railway station. 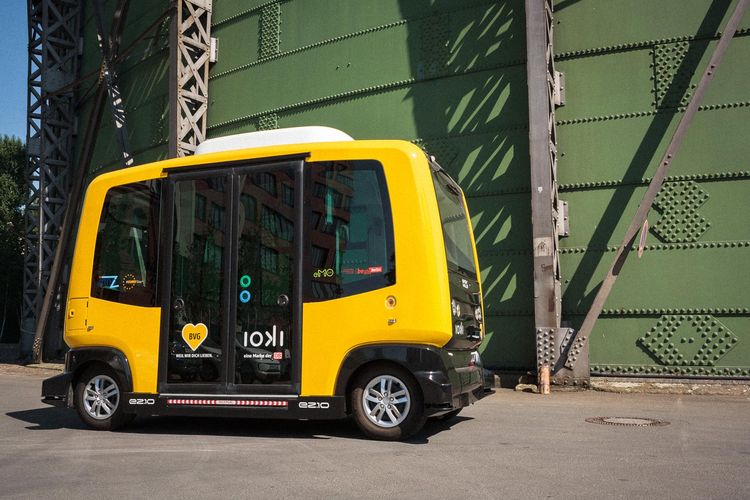 In Finland, testing of the buses in urban traffic began back in 2016. This was rendered possible by a loophole in Finnish law which means that neither driver nor steering wheel are mandatory. In Hamburg, too, autonomous buses will soon be trundling along public roads. A bus testing programme which is scheduled to last a number of years will start in 2019. The infrastructure which will communicate with the shuttles is currently under construction on the roads. Sensors affixed to streetlights will tell the autonomous vehicles exactly what is happening in the traffic around the next corner. Networked traffic lights will let the robot bus know when it can safely cross over a junction without any intervention on the part of a human back-up driver. In the Swiss town of Sion, where robot buses have been meandering through the centre since 2016, such smart traffic lights are currently being installed. This will both enhance safety and, at the end of the day, increase the speed at which the shuttles can move around. 2021 has been set as the date by which the buses should be flitting through the port city of Hamburg at 50 km/h – this is planned by the Transport company Hamburger Hochbahn.

In Hamburg, too, autonomous buses will soon be trundling along public roads.

However, some technical obstacles to this are yet to be overcome. In winter, snow-covered roads might make it harder for the sensors to guide the buses, explains project manager Hunsicker. Finnish company Sensible4 is already working on a solution to this problem. However, as the test drives have also demonstrated, the sensors don’t always take kindly to water falling from the sky. The onset of drizzle over the campus doesn’t bother Emily in the least. But then the heavens open, and the bus slows down and finally comes to a stop. For safety reasons we now have to go back under manual control, the back-up driver explains as he reaches for his joystick. But as suddenly as it began, the rain stops, and Emily heads off again with a satisfied hum. “Let’s face it, the technology is still in its infancy and will continue to develop,” Frank Hunsicker explains. Sensor systems are being overhauled, and the autonomous buses are learning with each test. And, unlike human drivers, they will never fall prey to cockiness or fall asleep at the wheel. 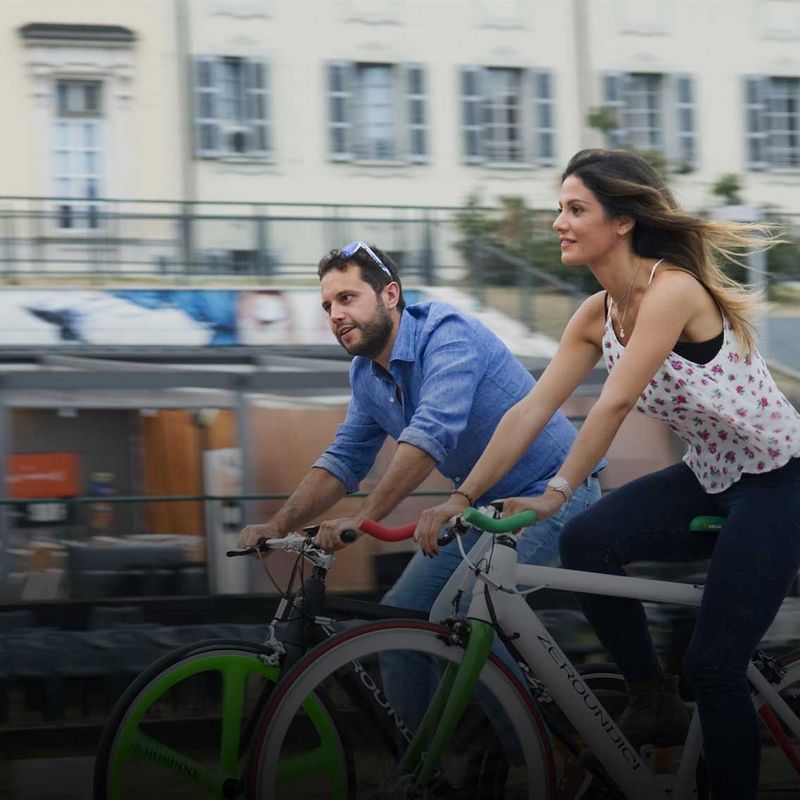 E-bikes are popular but need more professional maintenance than traditional bikes. #explore is looking into the search for a trustworthy bike workshop. 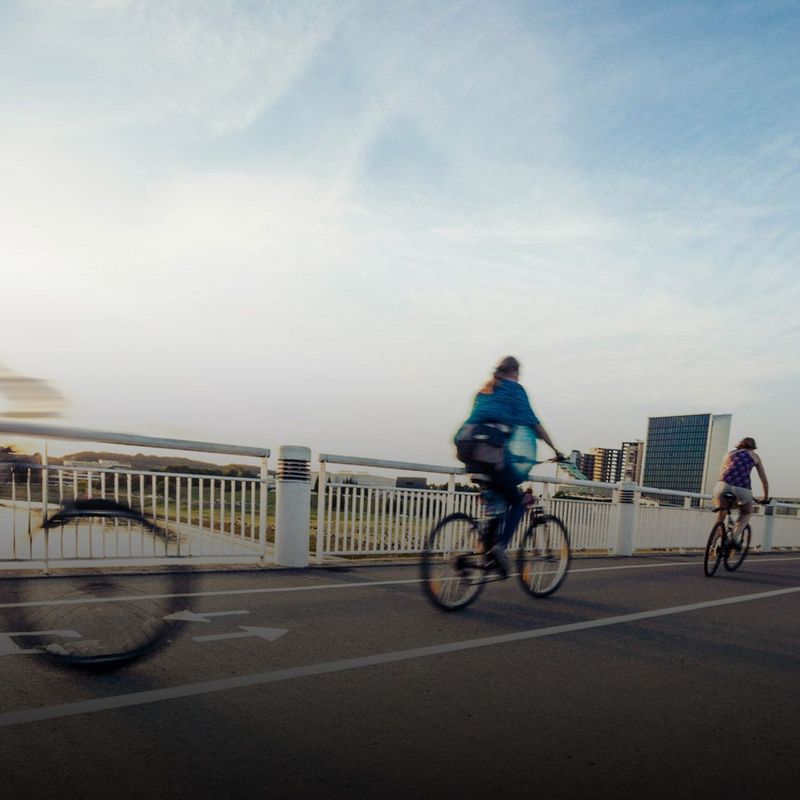 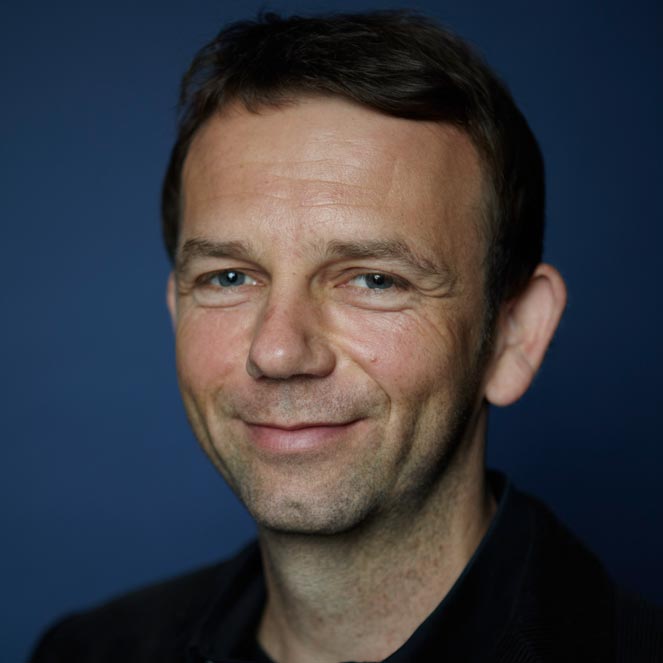 Frank Hunsicker leads the programme „Automated Driving“ at the Innovation Center for Mobility and Societal Change (InnoZ) in Berlin.