New car models have been required to undergo the new WLTP test cycle for type approval since the autumn of 2017. As of 1 September 2018, this procedure for the measurement of emissions and consumption will additionally apply to all newly registered vehicles. #explore explains what changes the new test cycle is going to bring.

As of 1 September 2018, it will be official. From that date, all vehicles will have to undergo the new procedure known as the Worldwide Harmonised Light-Duty Vehicles Test Procedure (WLTP) prior to registration. The idea behind WLTP is to make the measurement of fuel consumption and CO2 emissions more realistic than the previous standard, NEDC (New European Driving Cycle). WLTP has been binding in the EU for the type approval of new models since 1 September 2017. Since then, cars have been awarded type approval by the Kraftfahrt-Bundesamt, the German Federal Motor Transport Authority, only if they comply with emission standards 6c and 6d-TEMP. For the latter, vehicles must now pass an exhaust gas measurement test on the road in addition to undergoing tests on the chassis dynamometer. The “real driving emissions” test (RDE) is intended to determine whether the limit values for nitrogen oxides are also being adhered to in actual road use. The emissions may initially exceed the chassis dynamometer value by a certain factor; by 2020, however, the values in the lab and on the road will not be permitted to differ by more than one measurement tolerance.

The WLTP test, like its predecessor, the NEDC, is carried out entirely under laboratory conditions. The vehicle is placed on a chassis dynamometer and taken through a standard drive cycle with precisely prescribed elements. In contrast to the NEDC, the cycle used in the WLTP method is for the first time based on real data collected from motorists from Italy to India. A total of 750,000 kilometres were covered for test runs through 14 countries in Europe, Asia and North America. 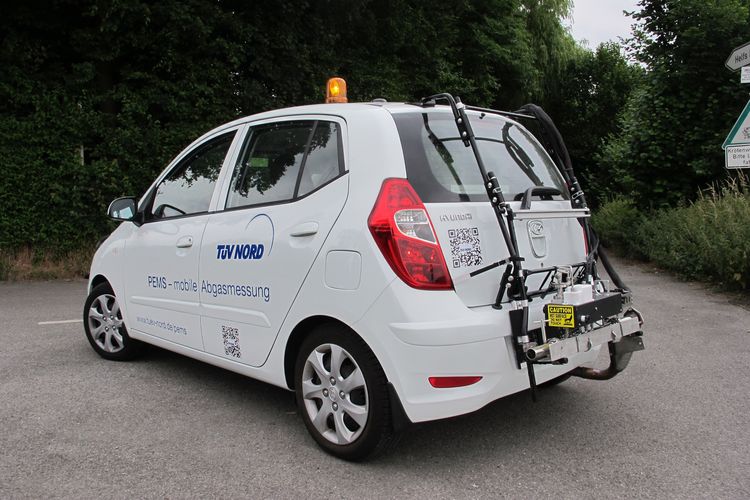 © TÜV NORD
Ready for the RDE test on the road: The data are collected with the “Portable Emissions Measurement System” (PEMS) at the rear of the vehicle.

Longer routes and higher speeds have also been included to make the test more realistic. At 30 minutes, the new cycle lasts 50 percent longer than before, and standing time has been reduced by almost 24% to 13%. Instead of 11 kilometres, the vehicles being tested now cover the equivalent of 23 kilometres on the chassis dynamometer. To simulate motorway cruising more effectively, the maximum speed has increased from 120 to 131 kilometres per hour. This is also apparent from the higher average speed, which has risen from 34 to 46 kilometres per hour. And instead of simulating a combination of urban and non-urban traffic, the test is now conducted in four phases to establish how well or poorly a vehicle performs on highways, trunk roads, motorways or in urban traffic.

Braking and acceleration will in the future also be measured in conditions more akin to those found on the road. Whereas, in the NEDC, the test vehicles accelerated from 0 to 50 kilometres per hour in 26 seconds, the new testing cycle requires them to accelerate or brake more frequently and strongly. The temperatures for testing, too, are now very precisely defined. In the NEDC, temperatures of up to 30 degrees were possible. The WLTP now uses a fixed test temperature of 23 degrees. Because this is still above the average temperature for Europe, an additional test at 14 degrees Celsius is carried out here. This ensures the authenticity of the measurements. This is because, at the low ambient temperatures found here in spring, autumn and winter, the engine takes longer to warm up and uses commensurately more fuel.

Unlike the NEDC, testing with WLTP is no longer confined to the basic version of a car model. In the future, all model versions, with all their different body shapes, transmission combinations and special equipment, will have to take to the test stand. After all, extras such as sunroofs increase the weight of a car, and wider tyres boost rolling resistance and, consequently, fuel consumption and emissions. To sum up, these innovations are increasing the duration and number of the tests and, accordingly, the time required for their documentation in terms of execution and assessment.

The reality check on the road

In addition to the WLTP cycles on the dynamometer, new vehicle types will also now be put through their paces in an elaborate RDE test to be carried out on the road. This is because even improved laboratory procedures such as WLTP can do nothing more than approximately mirror real conditions. However, their advantage lies in their comparability, as vehicles from different manufacturers are tested under identical conditions. As a complementary reality check for emissions of nitrogen oxides and particulate matter, the RDE test has been mandatory for type approval in line with 6d-TEMP since September 2017. The mobile measuring technology deployed has been used in the type testing of Euro-VI lorries since 2011. Unlike in the laboratory, however, test conditions such as wind and traffic conditions, temperature or acceleration vary on the road. Nonetheless, RDE tests, too, are designed to generate the highest possible levels of comparability. For instance, in addition to those parts of the test performed on highways and motorways and in urban traffic, minimum and maximum speeds and differences in height are also defined.

Measurement of emissions and fuel consumption

As from 1 September 2017, a new mandatory procedure for measurement of emissions and fuel consumption will be introduced in stages in the European Union.

Nancy Brüggemann have quite naturally taken their place in the car tuning scene and love tinkering about with their own cars.