Women have quite naturally taken their place in the car tuning scene and love tinkering about with their own cars. One of them is Nancy Pintovic, who scooped a tuning award in 2009 for TÜV NORD with her knack for getting the best out of lovely fast cars. In this interview, the lady petrol head, who is now married and bears the name of Brüggemann, reveals why she can’t drive bog standard models and what beginners should watch out for.

#explore: Are you still an active member of the tuning scene?

Nancy Brüggemann: No, I’m not as involved as I used to be. My husband and I became parents a few weeks ago, and at the moment I’m looking after our son at home.

#explore: Do you share your hobby with your husband?

Nancy Brüggemann: He keeps well out of it. At the beginning he even found it off-putting, as he saw on Facebook what was I doing and had no idea what he was letting himself in for. After all, people tend to lump amateur tuners together in the antisocial pleb category. 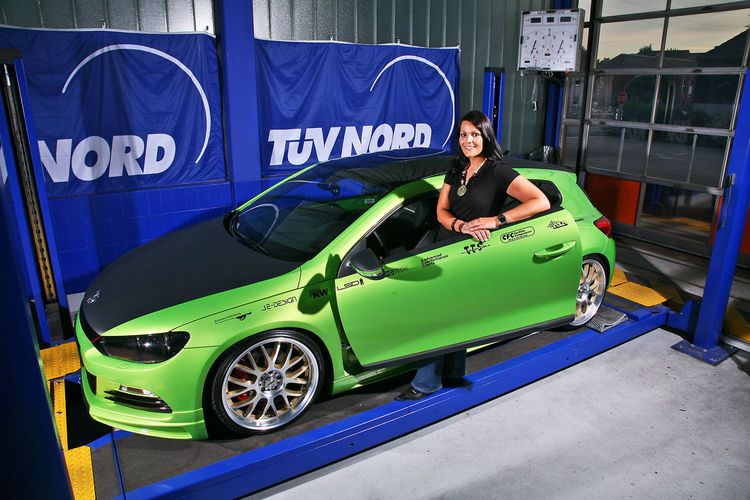 © TÜV NORD
Nancy Brüggemann with her VW Scirocco in the Garage of TÜV NORD.

#explore: How are you finding you new role as a mother?

Nancy Brüggemann: For the first week I hated it: I just cried all the time and thought my life was over. Unfortunately, no-one ever tells you that it’s normal to feel like that. But now we’re completely in the zone, and I’ve fallen head over heels in love with the little dot: he laughs loads and is incredibly sweet - and loves being out in the car!

#explore: So you’re now 100 per cent mother. Have you completely renounced your passion for tuning fast cars?

Nancy Brüggemann: I still drive a tuned car but not as much as I used to. My husband and I thought about the right car for us as a family and opted for an A class. But even with all the special features, it wasn’t enough for me. Once you’ve driven a perfectly constructed car, a standard model just doesn’t do it for you any more. Which is why I kitted our family runabout out with springs and rims and had all the chrome parts painted black. The perfect mummy car!

#explore: What happened to your VW Scirocco? In 2009 you worked with TÜV NORD to turn the standard model into a highly tuned one-off.

Nancy Brüggemann: Once the collaboration with TÜV NORD had finished, I enlisted the help of sponsors to buy the Scirocco from the dealership and completely rebuilt it to suit my tastes. For instance, I had it sprayed in a colour that was mixed just for me. At the end of the day I really did have my dream car, but I didn’t drive it, sadly. It would have been too expensive. Even if only the tiniest thing had gone wrong. So I kept it in the garage for protection.

“People tend to lump amateur tuners together in the antisocial pleb category.“

#explore: But a car still loses value even when it’s kept locked away.

Nancy Brüggemann: Exactly. Which is why I finally decided to sell it. As luck would have it, to Willi Weber, the ex-manager of Michael Schuhmacher, who wanted the car for his granddaughter and sent his chauffeur up from Stuttgart to pick it up.

#explore: You haven’t just tuned your cars: as a presenter you were even once the face of the scene. How did that happen?

Nancy Brüggemann: It was sheer chance. I mostly did my projects with sponsors, and so I knew loads of dealers and manufacturers. One of them contacted me and told me about a new online magazine, for which they were looking for a presenter. I clapped my hands to my head and told them that I couldn’t do it, I wasn’t a presenter.

#explore: But hopefully you went beyond yourself?

Nancy Brüggemann: Yes, I gave it a try, and luckily it worked out. One thing led to another, and I ended up presenting in various formats, including on TV. In the end I was even booked by the Essen Motor Show, Europe’s biggest tuning fair, as a roving reporter, meaning that I got to report on all the news from the sector. I did that a few years in a row.

#explore: Don’t you miss it?

Nancy Brüggemann: My priorities have changed. These days I prefer looking at the world to standing next to my expensive car in the middle of a field at a tuning event. I think it’s an age thing. But it’s nice that I’ve kept my friendships from back then to this day. But if an event happens to be taking place close to Neuss where we live, I will still happily grab my husband or the little one and go and take a look. The Motor Show is still an absolute must. I was still traipsing through the rims hall when I was six months pregnant - it was like a huge class reunion. This year the wee one is coming too. He’ll be wearing ear defenders. But no-one is going to stop me going.

Nancy Brüggemann: The BMW pedal car is already in the cellar. We’ve opened an account for our son and will carry on putting money into it till he turns 18. Perhaps by then there’ll be enough money not just for his licence but also for a better car than I had when I was learning: old Opel Corsa with broken heating in which I always froze solid during the winter months.

#explore: What advice would you as a tuning expert give to beginners?

Nancy Brüggemann: Safety is paramount. Some people really think it’s cool to lower the car as much as possible and to scrape along the ground, stuffing up their wheels and wheelhouses in the process and doing something illegal. I’m not into that in any way. Safe driving comes first. Which is why everyone should make sure that they only use certified parts that have been TÜV-tested and get them entered into the vehicle log book.

Punishment for speeders: Five years without a licence

Even after the harsh ruling in the speeders’ trial, petrol heads will continue to meet for road races on Carfreitag. A transport psychologist explains what will really deter them. 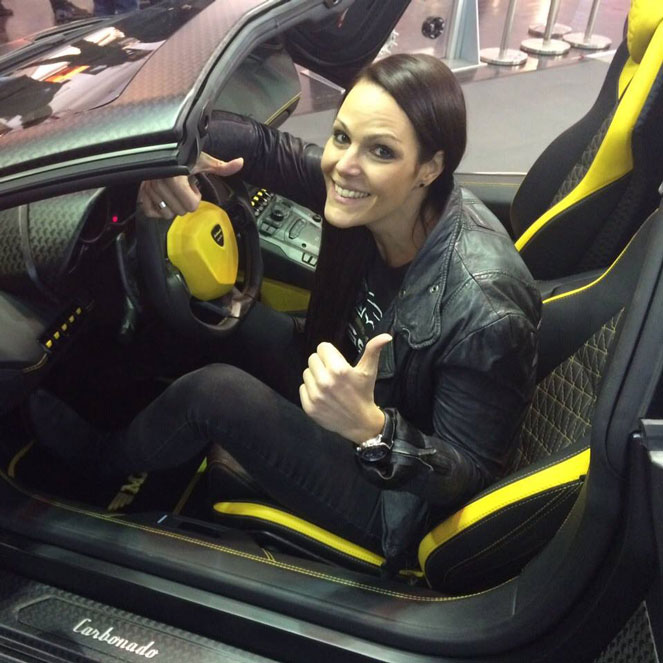 Nancy Brüggemann scooped a tuning award in 2009 for TÜV NORD with her knack for getting the best out of lovely fast cars. Currently she isn’t such an active member of the tuning scene. The reason: A few weeks ago she gave birth to a little baby boy. Her son inherit the love for cars.

Better engine performance? Higher top speed? More design? If you want to tune up or convert your car, safety and not driving fun should be your prime concern. TÜV NORD has collected some of the most important tips and useful information here