Before the German evening news programme, the Tagesschau, was able to go live with its new look, specialists had been working to develop a safety concept that was unique. The system was tested by TÜV NORD.

It’s eight o’clock in the evening in a typical German living room: the TV is on, and the family is waiting for the usual opening credits of the Tagesschau. And yet, on April 19 2014, everything looks different – as it has ever since. In place of the title captions and the old default view that used to show the upper body of the newsreader sitting behind a desk, on the stroke of 8 pm ARD viewers now find themselves looking at the entire studio from a bird’s-eye perspective, with the tiny figure of the newsreader behind one of two tables. In a spectacular panning motion the camera moves closer and focuses on the presenter until he or she fills the screen next to a section of the media wall. This is made possible by three motorised robot cameras hanging from the ceiling. “These robot cameras that can film while they’re in motion are the only ones of their kind in the world,” says Stefan Rickmann, the man responsible for the planning and implementation of studio projects at the NDR TV channel. 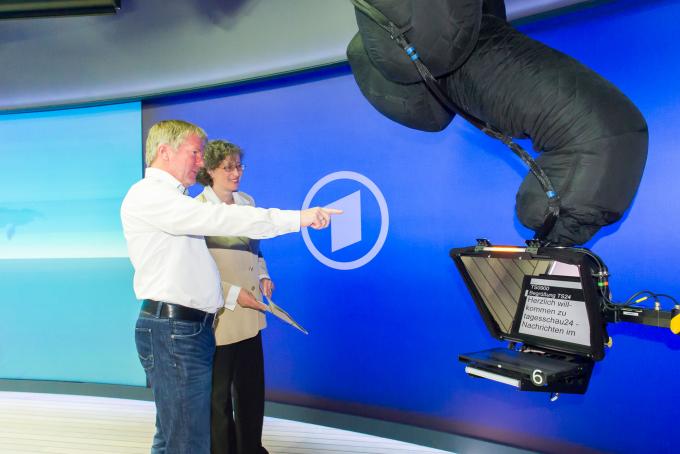 During its history, which stretches back over 60 years, Germany’s oldest newscast has undergone several makeovers. Since Easter Saturday last year, however, the Tagesschau has, like its sister shows Tagesthemen and Nachtmagazin, been broadcast from a completely redesigned ARD studio in Hamburg: At the beginning of the travelling shot in the opening credits, two three-arm newsreader desks can be seen, along with the 18-metre-wide media wall and the presenters’ podium which, with its illuminated edge, which is reminiscent of ship’s planking. The general effect is one of clarity and spaciousness. The hundred spotlights on the ceiling, the floor cameras and, of course, the three robot cameras hanging on the ceiling remain invisible. “We had to build a sturdy steel construction on the studio ceiling so that the robots could be mounted on the triangular track arrangement,” explains Mr Rickmann. And, what’s more, the NDR occupational safety team and TÜV NORD have long been working on refinements to a safety concept. The safety system developed by the manufacturer of the robot cameras, Camerobot systems, was tested and approved by TÜV NORD, and NDR gets it inspected by an expert every four years. 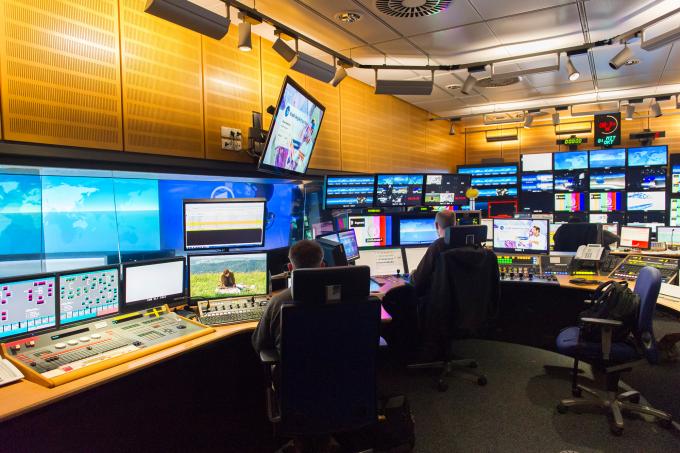 © Hauke Hass
The team in the control room is in direct visual contact with the studio.

The robots are used primarily in the automotive industry, and Camerobot has adapted them to the requirements of a television studio. “In industrial production it’s all about precision and speed,” says Peter Pühringer, project manager at Camerobot. “Whether the gripper arms shake when the camera is in motion is completely irrelevant. The main thing is that it hits the target.” The movements of these robots, from which 20 kg cameras are suspended, must in contrast be smooth, and starts and stops must not be allowed to cause the cameras to wobble, which would lead viewers to see a wavering image. The noise caused by the mobile robots, the second problem, is absorbed by special casings.

Review in line with numerous standards

The biggest challenge was to prevent collisions between people and machines – and between the machines themselves. “What we have in the ARD studio is to all intents and purposes a walk-in machine room,” says Bernd Nowoczyn, an expert from TÜV NORD, who carried out the tests and passed the safety management system. “There isn’t yet any specific standard or directive to guide us. We finally opted for two regulations as the basis for the concept: professional association regulation BGV C1, which governs the safety requirements for event and production facilities for scenic representation, and DIN 56950 for mechanical equipment on stages and in studios,” the expert explains. In addition to many other standards and regulations, the risk assessment of the manufacturer was included in the safety assessment of the system. The specialist was assisted in the testing of the electrical systems by his colleague Carsten Ohlandt. 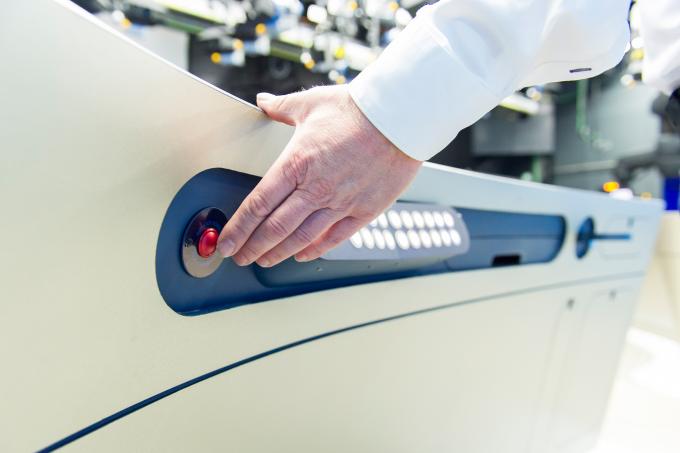 © Hauke Hass
The red button also gives the presenters a feeling of safety.

With the exception of the presenters and studio guests, no-one may enter the studio. Before, during or after a broadcast, whenever the cameras may require reconfiguration, all the other people involved are to be found in the control room. The presenters too are severely restricted in their freedom of movement: During a broadcast they have to walk along set paths to ensure that they are properly captured by the travelling shots. Tiny signs on the floor mark orientation points. They may not leave the podium at any time.

Safety at every step

The special feature of the safety system – six floor scanners and one ceiling scanner – is invisible to the viewer. The scanners, located a few centimetres above the floor, continuously scan the podium and determine the position of the people in the studio. They are connected to the robot cameras and calculate when the movement of a robot arm needs to be interrupted to prevent it from getting too close to the presenter. “Behind the desk there always used to be mobile pedestals or bags. This is no longer possible with the new safety concept, as the scanner would interpret this as a breach of the safety area and stop the whole system,” Mr Rickmann explains. The benefit is this: “The presenters’ tables now have drawers and compartments, and the studio looks a lot less cluttered.” Two floors scanners and a further unit attached to the ceiling scan the limits of the presenters’ podium. 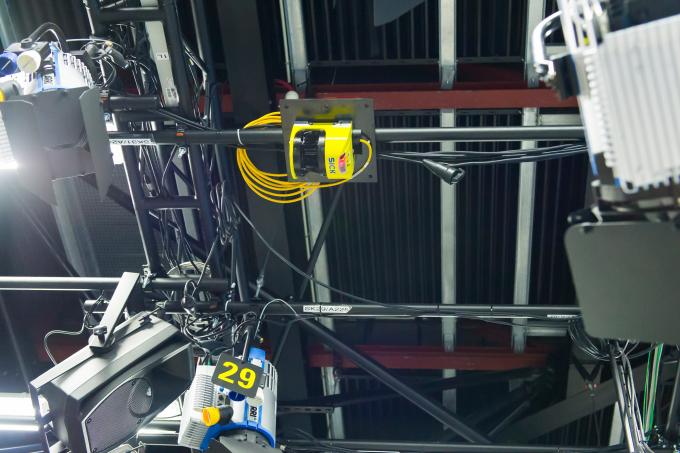 © Hauke Hass
The ceiling scanner, as an important element of the safety systems, is intended to prevent collisions between the cameras and the presenters.

Anyone approaching the virtual curtain set up by the floor scanners first causes a warning lamp to light up on the teleprompter, telling the person concerned to move away from the edge of the podium. If the individual concerned comes to within two metres of the invisible barrier, the second safety level is triggered: the camera stops moving. “Two metres represents an interval that you can’t span even with outstretched arms,” explains Petra Cohrs, head of occupational safety at NDR. “As the robotic arms are configured to move smoothly, the attentive viewer may possibly notice an abrupt stop,” Mr Rickmann says. Thus far there has never been an emergency stop during a broadcast.

“It’s good to know that I can quickly and automatically stop a camera from bearing down on me in the event of emergency.”

In addition, in the control room there is also a red button that will stop the robot cameras in their tracks. As psychology plays an important role, there is also an emergency stop button on the back of the presenter’s table. “The buttons have only ever been pressed for test purposes,” says Petra Cohrs. “But it’s good to know that, if I have to, I can stop the camera from automatically bearing down on me.” If all else should fail, the presenters can take refuge between the two tables: the only place in the studio where none of the robotic arms can reach them. But it won’t come to this – after all, Bernd Nowoczyn also wants to be able to find out every day at 8 pm what’s been happening in the world. 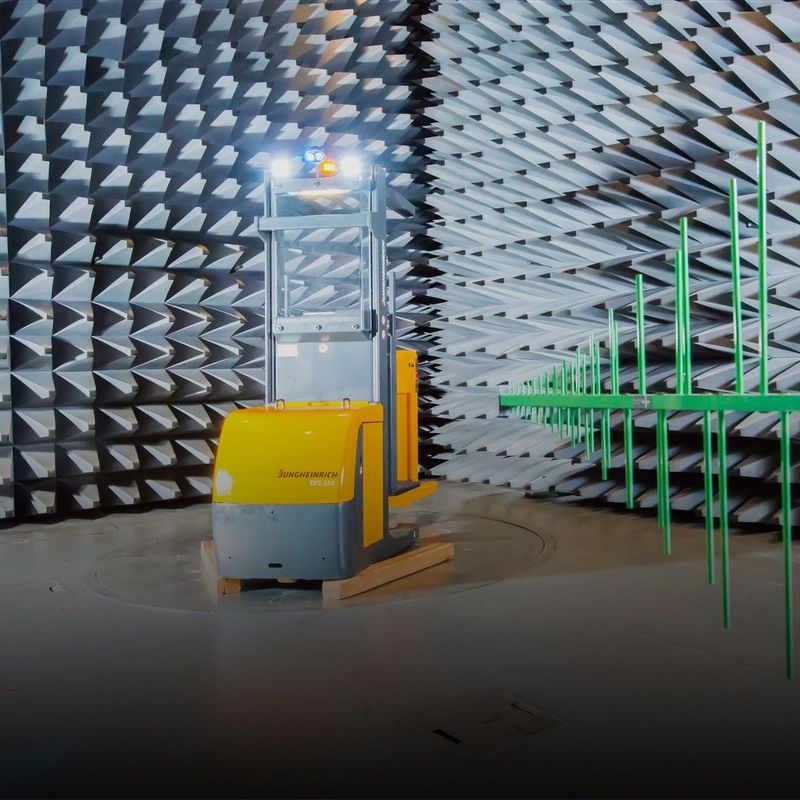 It is essential for electronic devices to operate faultlessly alongside one another: products are tested for electromagnetic compatibility in the laboratory by TÜV NORD before their market launch. 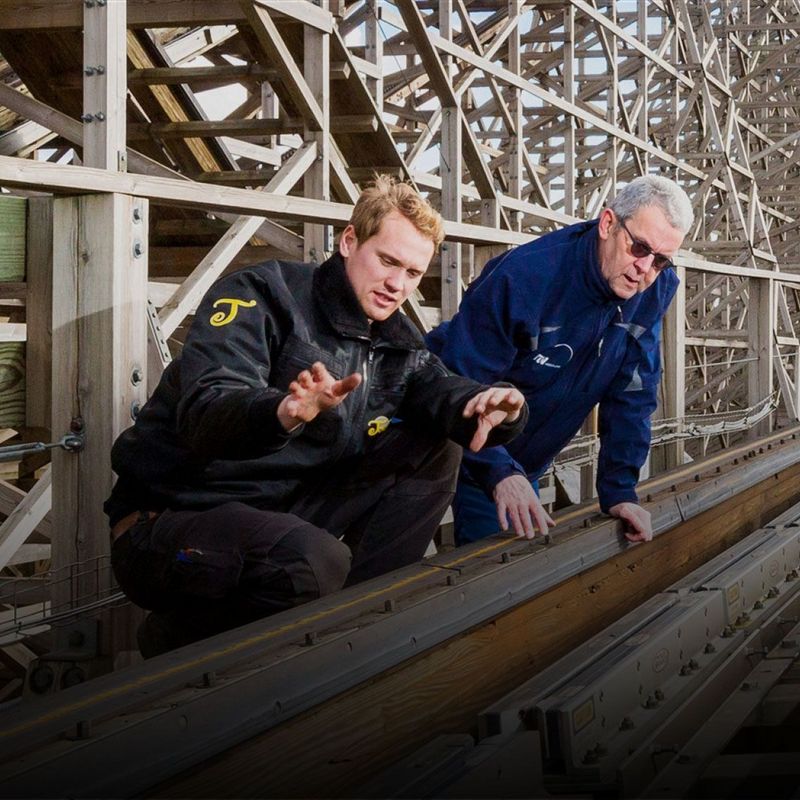 In amusement parks, visitors can experience thrills and leave everyday life behind them. 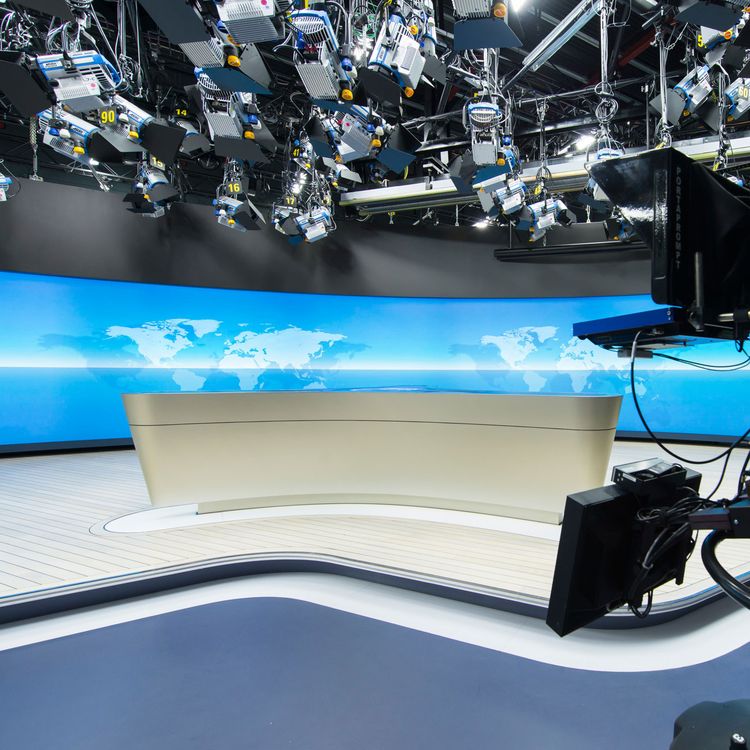 Thanks to the rebuilding work, ARD can now broadcast all its newscasts from a single studio, with up to 20 broadcasts a day.

Alongside the robot cameras, the 18-metre-wide media wall forms the centrepiece of the new 320-square-metre ard studio. Seven projectors beam out 3-D graphics, panoramic images, photos and videos from behind the semi-circular wall. The newsreader stands in front of this wall and can also see the images and graphics.

The special feature is this: unique graphic software makes it possible to display the images on the concave wall in such a way that they are reproduced without distortion and in real time from every camera angle when moving cameras are being used.