The times when computer games were only played by boys are now a thing of the past. These days, women are just as keen on gaming as men. And yet, the proportion of women working as videogame developers is still low. It was precisely this phenomenon that media scientist Sabine Hahn chose to examine in her dissertation "Gender and Gaming - women in the spotlight in the games industry".

Age:
41 (as old as the hills, according to my eldest daughter)

Studies have revealed that half of all computer gamers in the modern age are female - but women make up only 20 to 25% of employees in the global gaming companies. How can this discrepancy be explained?
It was this very question that was the starting point for my dissertation. I wanted to explore this phenomenon using scientific methodology. The truth is that, while I managed to offer some approaches to explaining it, I wasn't able to come up with a universal answer in the sense of a monocausal explanation.

You worked in the gaming industry yourself for a few years. What kind of experience did you have as a woman?
I worked in the games industry for about 10 years, four of which I spent in London, always for international companies and with people from more than 30 cultures. As far as my gender goes - yes, it's true, right from the start I always came up against the fact that it was unusual to find a woman working in the sales field of a sector that has tended to be dominated or shaped by men. Sometimes this affected me more than others, but an awful lot has changed since then. In 2003, at the start of my games career, women really were few and far between. Nowadays, however, between a quarter and a third of the people working in the sector are female.

In the development of the "Sims", one of the world's most popular ever computer games series, the focus was on ensuring gender parity among the developers. Does having a higher proportion of women developers mean that the games attract more women?
The Sims game has a really interesting development history, which is why I devoted a chapter to it in my book "Gender and Gaming". Okay, so there weren't quite as many female developers as male. But the unusually high proportion of female developers meant that they scored a major and, above all, unexpected success in the female target group. I'm convinced that diversity in teams has a positive impact on the product. No matter whether you're looking at games, cars, furniture or other products and services.

"I'm convinced that diversity in teams has a positive impact on the product."

What exactly is the influence of greater diversity in the team on the content and design of the games?
It's an established fact in the games industry, as elsewhere, that diverse teams work better together, are more efficient and develop more diverse products. This doesn't just have to do with the relationship between the sexes but also relates to diversity in terms of age, cultural or ethnic background and sexual orientation. In one of her lectures, game designer Siobhan Reddy explains how she took over a completely male team of developers which was in the middle of developing a major blockbuster game. To put it simply, the developers hadn't taken any female characters into account because they were doing the development work from a male perspective. The basic principle here is one of generating awareness and representing different perspectives. But what we're not talking about is "games for women" and "games for men".

How do you explain the fact that few women have until now done work crucial to the development of games, for instance as developers? How can and should that change?
There isn't a monocausal explanation for this either; the reasons are many and various. Studies have shown that 75% of women in the games industry work in non-technical areas, such as HR, marketing, sales or legal departments. But I think this is changing, as the number of young women in game programming and similar degree or training courses is rising inexorably. And another natural consequence of this development should be that the number of women in the technical areas should grow as well.

Another factor which is specific to the games industry is what is known as “crunch time” – with some people fondly refer to as "bad project management". All this means is that, in particular phases in the production of the game, there's no cap on the hours the developers have to work, and this can sometimes go on for weeks at a time. This can't be reconciled with part-time work which, even though in my experience it tends less to be the case in the games industry, is still mainly accounted for by women.

In 2012, cultural scientist Anita Sarkeesian ventured the criticism that female figures in computer games all too often conform to sexual stereotypes. How do things look now?
In a nutshell, things are changing both qualitatively and quantitatively. In recent times, and I believe this to be a consequence of the vehement debate, more and more games have been appearing with female lead characters. On the other hand, the characters are also becoming more diverse per se: you get homosexual girls in puberty, powerfully built and fully clothed women, and male protagonists who don't exactly come across like Adonis. And freedom of choice and design in games has also become more diverse. I see this overall as a great and very hopeful development, although it took the efforts of women like Anita Sarkeesian and the #GamerGate scandal of 2014 to get it moving in the first place.

"The number of young women in game programming and similar degree or training courses is rising inexorably."

Which computer games were particularly influential for you personally?
1. Tetris. Partly because I just loved it, also because I worked for a company which made Tetris for mobile platforms.
2. SSX Snowboard.
3. TheSims. Because they're relevant to the subject of my research and are also a really exciting games franchise.

Which digital product has yet to be invented?
Since I notch up a good few kilometres for my job, I really do often find myself wishing that I could simply beam myself through space and time. There's nothing more tedious than having to spend 10 hours travelling to facilitate a workshop for half a day, don't you think?!

And which can you do without?
My (radio-controlled) alarm clock ☺

How smart is your home?
Only moderately; we tend to be conservative. On the one hand, we’re pretty well kitted out with iDevices - Apple products for every age group - on the other, however, we don't even have a TV, a microwave, Alexa and so forth. We’ve consciously decided to do without them.

Which technical application will always remain something of a conundrum for you?
The Thermomix. Both the device itself and all the hype surrounding it.

A holiday without Wi-Fi - is that a dream or a nightmare?
I can happily do without broadband on holiday and find it very relaxing when I can “power down”. On the other hand, I'm fairly dependent on digital tools, gadgets and communication and information sources in my everyday work, meaning that, on balance, it would be something of a nightmare for me.

In the #explore format we’re giving a regular voice to exciting and inspiring people from the digital scene – to researchers, bloggers, start-up founders, entrepreneurs, hackers, and visionaries. 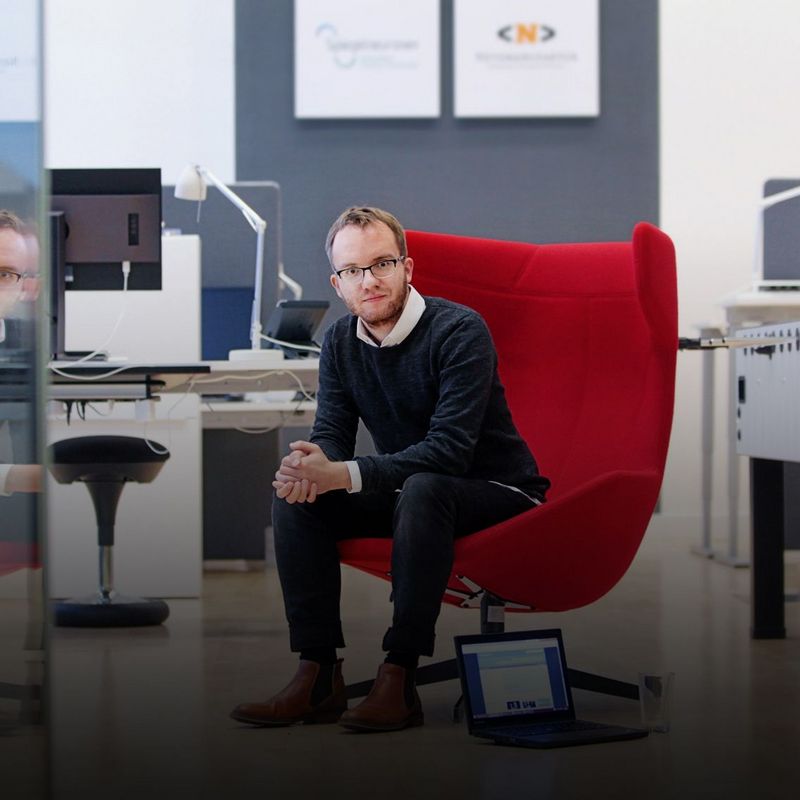 Ansgar Jonietz: “We want doctors and patients to be on equal terms”

The #profile series of portraits introduces exciting and inspiring people from the digital scene. This time we interview Ansgar Jonietz, one of the founders of „Was hab ich“.

Maggie Herker: “Failure is not an end in itself”

Shame is out. These days, entrepreneurs need the courage to fail. YouTuber Maggie Herker explains why failure is romanticised - but still important.